Netflix launches in the UAE, adds Arabic language to its offering - Gulf Business 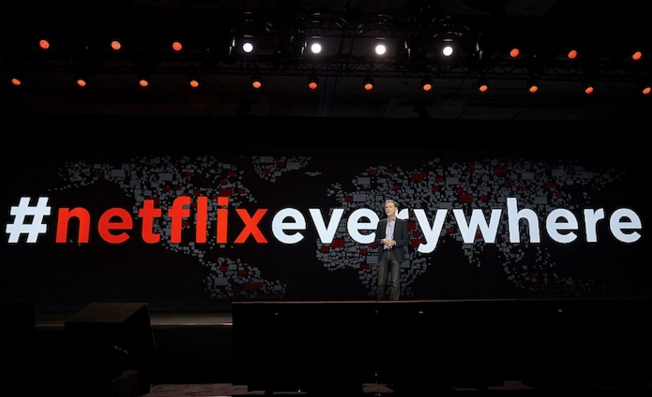 United States-based web streaming TV network Netflix has launched in the United Arab Emirates and other regional countries as part of a major worldwide rollout, it announced on Wednesday.

The company has expanded its services to 130 new countries, increasing its reach to 190 countries globally. Netflix has also added Arabic, Korean, simplified and traditional Chinese to the 17 languages it already supports.

The announcement was made by Netflix co-founder and chief executive Reed Hastings during a keynote at CES 2016 in Las Vegas.

“Today you are witnessing the birth of a new global internet TV network. With this launch, consumers around the world will be able to enjoy TV shows and movies simultaneously — no more waiting. With the help of the internet, we are putting power in consumers’ hands to watch whenever, wherever and on whatever device,” he said.

Netflix is offering a one-month free trial to users. Monthly plans start from $7.99 in the UAE, its website states.

Members can access Netflix original series including Marvel’s Daredevil and Marvel’s Jessica Jones, Narcos, Sense8, Grace and Frankie, and Marco Polo, and a catalog of licensed TV shows and movies.

“From today onwards, we will listen and we will learn, gradually adding more languages, more content and more ways for people to engage with Netflix,” said Hastings.

Netflix will not yet be available in China, though the company said it “continues to explore options for providing the service”. It also won’t be available in Crimea, North Korea and Syria due to US government restrictions on American companies.

Netflix is available on any device that has an internet connection, including personal computers, tablets, smartphones, smart TVs and game consoles.

“With the internet, global distribution no longer needs to be fragmented. It means that everyone pretty much everywhere should be able to see great films or TV shows at the exact same moment. The technology is there. It’s business models that now stand in the way,” said chief content officer Ted Sarandos.

Regionally, Netflix will compete with the likes of US rival Starz Play, which launched across 17 countries in the Middle East and North Africa region in April 2015. Regional players such as OSN and beIN are also growing aggressively.

Buoyed by a demand for digital content, the MENA region is increasingly becoming an attractive market for online streaming sites.

According to a recent report by advisory firm Ovum, revenues from subscription video on demand services are predicted to grow 25 per cent annually by 2019. They will account for 70 per cent of all OTT revenues in the region.