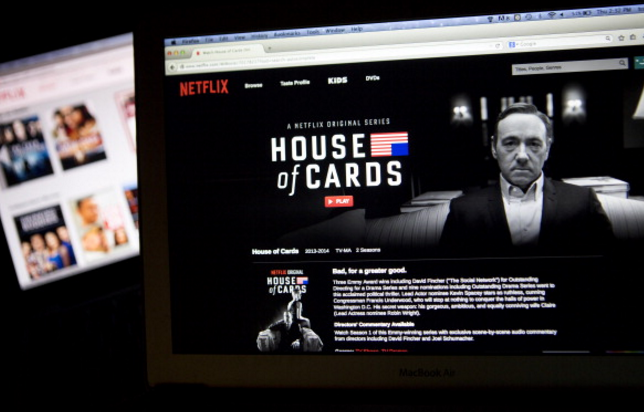 United States-based internet television provider Netflix has confirmed that it is in talks to try and get the rights for two of its popular TV series in the United Arab Emirates.

Netflix launched in the UAE last week as part of a global expansion which saw the network enter 130 new countries worldwide.

While the company has faced an issue of licensing agreements in several countries, all of its original programming except for two TV series – House of Cards and Orange Is the New Black will be available in the UAE, confirmed vice president and head of Europe, Middle East and Africa Communications Joris Evers.

“We are on the path to create a global service where we would have one catalogue available everywhere. We have been pushing more and more to buy the global rights to the titles that we put on Netflix,” he told Gulf Business.

“With original titles we can own global rights for almost all of our series. But House of Cards and Orange Is the New Black are the two exceptions. We started working on them before we launched anywhere outside of North America.

“It was a big shift for us to produce our own shows and it cost a lot of money at that time. So we didn’t buy them outright – we only bought the rights for the countries that we were in and few others where we knew we were going to expand pretty quickly,” he explained.

He added: “Now it’s about trying to get those rights. In the UAE, we are working on getting the rights to the two shows but I can’t promise we will get them. Orange Is the New Black – I think we will get, but House of Cards I’m not sure.”

Popular American political drama House of Cards began streaming on Netflix in 2013 and the fourth season is set to premiere in March 2016.

In the UAE, OSN holds the rights to the TV show.

Despite being unable to air the show, Evers opined its popularity has helped Netflix’s image.

“House of Cards being available all over the world has helped evangelise Netflix – people have noticed it as a Netflix show. They know Netflix has high-quality TV and good programmes and not just a bunch of web videos. It has helped build our brand and reputation,” he stated.

Evers also defended the network’s current portfolio and added that they were constantly building the content available.

“I think there are many new series best sellers such as Narcos, Making a Murderer, Jessica Jones, Bloodline – there’s a lot out there.

“This year we have 30 new seasons or new series – almost one every other week. Also we have kids programming, original features and documentaries, so the offering has grown substantially,” he said.

Netflix is offering a one-month free trial to users and monthly plans start from $7.99 (Dhs 30) in the UAE.

The entry of Netflix into the market follows the launch of US rival Starz Play last year. Buoyed by a demand for digital content, the Middle East and North Africa region is increasingly becoming an attractive market for online streaming sites.

According to a report by advisory firm Ovum, revenues from subscription video on demand service are predicted to grow 25 per cent annually by 2019. They will also account for 70 per cent of all OTT revenues in the region.