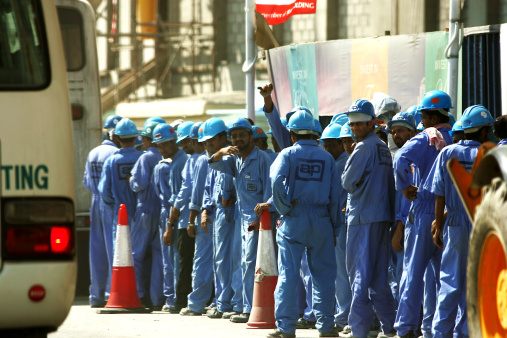 Officials from Nepal and Qatar sought on Monday to play down a news report that Nepali labourers face deadly conditions on the Gulf state’s building sites, holding a joint news conference to say the migrant workers were “safe and fully respected.”

Britain’s Guardian newspaper reported that dozens of Nepali workers had died on Qatari building sites over the summer. Nepal recalled its ambassador from Qatar on Thursday after it emerged that she had called the country an “open jail” for Nepalis who suffer labour abuses.

“We deny all that is mentioned in these false reports, and ask the bodies that publish them not to use Nepali workers as a means to achieve their inappropriate targets and agendas,” Mohammad Ramadan, employed by the Nepali government as a legal advisor for Nepali nationals, told the news conference.

“We also stress that all Nepali workers are safe and fully respected,” said Ramadan.

There are 340,679 Nepalis in Qatar, according to figures distributed at the news conference, attributed to the Nepali Embassy. Most of them work in construction in the wealthy country that is preparing to host the 2022 soccer World Cup.

Citing Nepali embassy figures, Ramadan said 276 Nepalis died in Qatar last year, of which 20 percent were on work sites. The rest died of natural causes and in accidents not at the workplace, he said.

So far this year, 151 Nepalis have died, 10 percent were on building sites.

A spokesman for the newspaper said on Monday that it stands by its story that embassy documents show the deaths of at least 44 Nepalese workers during that time, and that more than half died “of heart attacks, heart failure or workplace accidents.”

Ali al-Marri, the chairman of Qatar’s National Human Rights Committee, an official state body, told the news conference: “The numbers published by the media differ greatly from the actual numbers.”

Qatar was awarded the World Cup three years ago and now has to complete the infrastructure needed to host the huge sporting event. The sport’s governing body FIFA has said it was concerned about the reports of labour rights abuses.