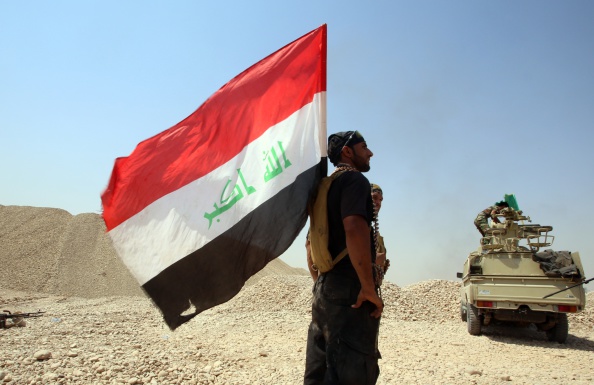 The machine gun poking out from between a framed portrait of a Shi’ite imam and a stuffed toy Minnie Mouse was trained on anyone who approached the checkpoint.

Like dozens of other communities in Iraq, this small Sunni settlement in northern Salahuddin province’s Tuz Khurmatu district has been reduced to rubble.

In October, Shi’ite militiamen and Kurdish peshmerga captured the village from the Sunni militant group Islamic State. The victors then laid it to waste, looting anything of value and setting fire to much of the rest. Residents have still not been allowed to return.

“Our people are burning them,” said one of the Shi’ite militiamen when asked about the smoke drifting up from still smouldering houses. Asked why, he shrugged as if the answer was self evident.

The Shi’ite and Kurdish paramilitary groups now patrol the scorched landscape, eager to claim the most strategic areas or the few houses that are still intact. For now, the two forces are convenient but uncomfortable allies against the nihilist Islamic State.

This is how the new Iraq is being forged: block by block, house by house, village by village, mostly out of sight and control of officials in Baghdad.

What is emerging is a different country to the one that existed before June. That month, Iraq’s military and national police, rotten with corruption and sectarian politics, collapsed after Islamic State forces attacked Mosul. The militant group’s victory in the largest city in the north was one step on its remarkable dash across Iraq.

Islamic State’s campaign slowed towards the end of the summer. But it has left the group in charge of roughly one-third of Iraq, including huge swathes of its western desert and parts of its war ravaged central belt. It also shattered the illusion of a unified and functioning state, triggering multiple sectarian fractures and pushing rival groups to protect their turf or be destroyed.

The far north is now effectively an independent Kurdish region that has expanded into oil-rich Kirkuk, long disputed between the Kurds and Iraqi Arabs. Other areas in the north have fallen to Shi’ite militias and Kurdish peshmerga fighters, who claim land where they can.

In Baghdad’s rural outskirts and in the Diyala province to the east and north towards Samarra, militias, sometimes backed by Iraqi military, are seizing land and destroying houses in Sunni areas.

Last there is Baghdad and Iraq’s southern provinces, which are ostensibly still ruled by the country’s Shi’ite-led government. But the state is a shell of what it once was. As respect for the army and police has faded, Iraqis in the south have turned to the Shi’ite militia groups who responded to the rallying cry of Iraq’s most senior clergy to take on Islamic State.

Prime Minister Haider al-Abadi, a Shi’ite moderate who became Iraq’s new leader in September, four months after national elections, hopes that the country can be stitched back together.

Abadi has tried to engage the three main communities, taking a more conciliatory tone than that of his predecessor Nuri al-Maliki, who was often confrontational and divisive. Abadi, the Kurds and even some Sunni politicians now all speak of the need for federal regions, so the country’s communities can govern themselves and remain part of a unified state.

Iraq, though, has been splintered into more than just three parts, and the longer those fragments exist on their own the harder it will be to rebuild the country even as a loose federation. Such an arrangement would require the defeat of Islamic State, a massive rebuilding programme in the Sunni regions, unity among Iraq’s fractious political and tribal leaders, and an accommodation between the Kurds and Baghdad on the Kurds’ territorial gains.

Even the optimists recognise all that will be difficult. Finance Minister Hoshiyar Zebari, a Kurd who wants Iraq to stay united, says he can picture Iraq eventually regaining its “strength and balance.” But, he concedes, “the country is severely fractured right now.”

Ali Allawi, a former minister of trade, defense and finance, and author of two books on Iraqi history, agrees. “There is so much up in the air,” he said. “There are the trappings of a functioning state, but it is like a functioning state lying on a sea of Jello…The ground is so unstable and shifting.”

Iraq’s Kurds often see opportunity in times of trouble. This year they moved quickly to take lands long disputed with Arab Iraqis, including Kirkuk. For a while, talk of secession increased, but then quieted after Islamic State mounted a successful attack into Kurdistan in August. Since then, buoyed by U.S. air strikes designed to hurt Islamic State, the Kurds have recaptured areas they lost and forged an agreement to export oil from Kirkuk and its own fields for Baghdad.

Kurdish business tycoon Sirwan Barzani, a nephew of Iraqi Kurdish President Masoud Barzani, sees this as a moment to advance his people’s nationalist dream. He was in Paris chairing a board meeting of the telecom company he founded in 2000 when he received news that Islamic State militants had overrun Mosul.

A former peshmerga fighter in the 1980s, he cancelled his holiday plans in Marbella and rushed back to Kurdistan to help prepare for war, taking command of peshmerga forces along a 130 km (81 mile) stretch of the Kurds’ front line with Islamic State.

Washington sees the Kurds as its most dependable ally in Iraq. For Barzani and other Kurds, though, the fight against Islamic State is simply the continuation of a long struggle for an independent nation.

Before leading an offensive last month to drive Islamic State militants back across the river Zab towards Mosul, Barzani said he met with an American general to talk strategy and coordinate airstrikes.

“They asked about my plan,” Barzani told Reuters in a military base on the frontline near Gwer, 48 kilometers (30 miles) south of the Iraqi Kurdish capital Arbil. “I said, ‘My plan is to change the Sykes-Picot agreement'” – a reference to the 1916 agreement between France and Britain that marked out what would become the borders of today’s Middle East.

“Iraq is not real,” Barzani said. “It exists only on the map. The country is killing itself. The Shi’ites and Sunnis cannot live together. How can they expect us to live with them? Our culture is different. The mentality of Kurds is different. We want a divorce.”

Where Kurds saw opportunity in 2014, Iraq’s Sunnis saw endless turmoil and new oppression. Residents in the western and northern cities of Mosul, Tikrit and Falluja – all now controlled by Islamic State – complain about fuel and water shortages, and Islamic State directives that women cover themselves and smokers be fined. They tell stories about the destruction wrought by shelling by the Iraqi government and U.S. forces.

In places where Sunnis themselves are battling Islamic State, the brutality can be unrelenting. Many wonder what will be left when the war finishes and whether it will be possible for Sunnis to reconcile even among themselves.

Sheikh Ali Abed al-Fraih has spent months fighting Islamic State. A tribal soldier in Anbar province, he has sunken, tired eyes and a frown. His clothes are one size too big for him.

He sees the conflict as an internal battle among the Anbar tribes. Some have chosen to join Islamic State, others to fight the group. Some of his enemies, he says, are from his own clan. The fight will not end even if areas around his town of Haditha and other Anbar cities are cleared, he says. All sides will want revenge. “Blood demands blood. Anbar will never stop.”

Fraih flew to Baghdad in late December to beg the government to send help to Haditha, which is pinned to the west and east by Islamic State and defended by a five km-long (3 mile) berm.

Fraih could only reach Baghdad by military plane. The government had promised for two months to send food and medicine, but no help had come. The week before Christmas the government told him help would come in a week. Fraih tried be polite about the promise, but it’s hard. “It’s all words,” he said.

Every day, tribal fighters and Iraqi soldiers in Haditha stop Islamic State assaults and defend the city’s massive dam. If Islamic State take the dam they could flood Anbar and choke off water supplies to the Shi’ite south. The army, in particular, is struggling, he said.

“In every fight the army loses 50 soldiers. Their vehicles get destroyed, they are short on fuel, and no new vehicles are coming. They are hurting more than my own men.”

The city’s one lifeline to the outside world is a huge government airbase called Ain al-Assad, some 36 km (22 miles) south. Fraih recently met U.S. Special Forces there. They assured him that if Islamic State breaks through the barriers to Haditha, the U.S. will carry out air strikes. The logic confuses Fraih.

“They know the people have no food, no weapons, no ammunition, nothing. We are sinking. If you are not going to help us, at least take us to the south and north. We are dying now.”

His faith in getting help from anyone has almost vanished.

“What is left of Iraq if it keeps moving this way?” he asked.

In a house on the outskirts of Baghdad, a Shi’ite tribal leader sat and imagined his world as “a dark tunnel with no light” at its end.

“Iraq is not a country now,” he said. “It was before Mosul.”

The sheikh, who spoke on condition of anonymity, would like to see his country reunited but suspects Abadi is too weak to counter the many forces working against him. Now the Shi’ite militias and Iran, whom the sheikh fought in the 1980s, are his protectors. It is a situation he accepts with a grim inevitability.

“We are like a sinking ship. Whoever gives you a hand lifting you from the sea whether enemy or friend, you take it without seeing his face because he is there.”

Iranian-advised paramilitaries now visit his house regularly. He has come to enjoy the Iranian commander of a branch of the Khorasani Brigades, a group named for a region in northeastern Iran. The commander likes to joke, speaks good Arabic and has an easy way, while other fighters speak only Persian, the sheikh said. He expresses appreciation for their defense of his relatives in the Shi’ite town of Balad, which is under assault from the Islamic State.

The sheikh’s changing perceptions are shared by other Iraqi Shi’ites. They once viewed Iran as the enemy but now see their neighbour as Iraq’s one real friend. The streets of Baghdad and southern Iraq are decorated with images of Iran’s supreme leader Ayatollah Ali Khamenei.

The sheikh, though, does not believe he can rely on Iran altogether. He is sure some Iranian-backed militiamen would happily kill him. He has heard of one case in Diyala where a militia leader shot dead the son of a popular Shi’ite tribal leader. He has also watched as militia fighters aligned with police and army officers kidnapped a cousin and a friend for ransom. “I feel threatened by their bad elements,” he said of the militias.

If the state doesn’t rebuild its military quickly and replace the multiple groups now patrolling the lands, the sheikh fears Shi’ite parts of Iraq will descend further into lawlessness.

“It will be chaos like the old times, where strong tribes take land from the weak tribe. Militias fight militias,” he said. “It will be the rule of the jungle, where the strong animal eats the weak.”