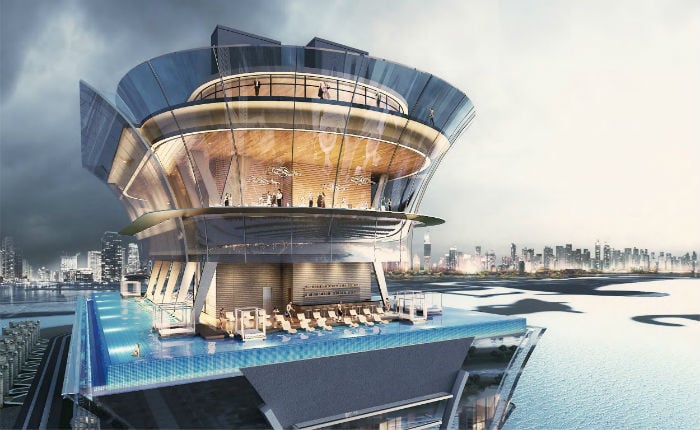 Dubai developer Nakheel announced that it has signed a deal with Hong Kong-based luxury hotel operator Shangri-La to manage its flagship hotel on Palm Jumeirah.

The two firms have inked a Letter of Intent for the management of Nakheel’s new, five star, 52-level hotel located in its upcoming Palm Tower development, a statement said.

The Palm Tower comprises 504 furnished apartments and a luxury hotel, with 290-rooms and suites, occupying the first 18 floors of the building. The project will also feature a rooftop leisure and dining complex, which includes a 360 degree infinity swimming pool – the highest in Dubai – on the 50th floor.

An enclosed restaurant is located above the pool, with a public viewing deck on the 52nd level.

Construction on The Palm Tower is due to start this year, the developer said.

“The Palm Tower will be our flagship hotel and the ultimate address on Palm Jumeirah,” said Nakheel chairman, Ali Rashid Lootah.

Greg Dogan, Shangri-La president and CEO, added: “The Palm Tower’s strategic position at the heart of The Palm and alongside the Nakheel mall makes the hotel the ideal location for anyone visiting Palm Jumeirah.”

The development will be directly linked to Nakheel Mall, a new, 418,000 square metre retail and entertainment destination with 300 shops. Nakheel Mall will also feature a range of food and beverage outlets, including 12 fine dining restaurants on its roof terrace, as well as cinemas, a medical centre and fitness centre. Nakheel recently awarded a Dhs1.2 billion contract for the mall’s construction, which is expected to start soon.

The Palm Tower will also have direct bridge access to Club Vista Mare, Nakheel’s new beach club complex on the island, and to Al Ittihad Park and the Palm Monorail, which will be connected to the new Dubai Tram system.

The project is one of nine hotels in the pipeline for Nakheel, which is focussing on boosting its hospitality portfolio. The developer’s first hotel at Dragon Mart (managed by Accor) is due to open this year. Other locations include Ibn Battuta (managed by UK-based Premier Inn), International City and Nakheel’s new waterfront city, Deira Islands.