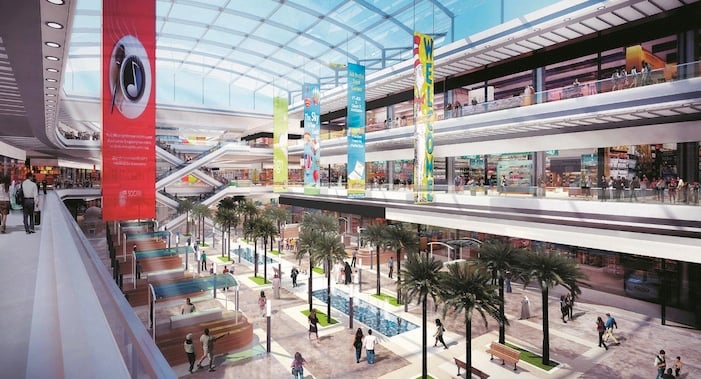 Dubai-based developer Nakheel announced that it has signed a deal with retailer Landmark Group to open 25 outlets in its upcoming mall, Al Khail Avenue.

The outlets will occupy over 220,000 square feet at the mall, which is also set to feature British supermarket chain, Waitrose, and a 14-screen movie complex from Reel Cinemas.

With a total of 1.2 million sq ft of retail space, Al Khail Avenue will have 350 shops, a range of cafes and restaurants including al fresco dining and a multi-storey car park with 4,400 spaces.

Construction on the mall, located alongside Dubai’s Al Khail Road, on the eastern edge of Jumeirah Village Triangle, will begin this year, with expected opening in 2018.

Manu Jeswani, director, Landmark Group, added: “Al Khail Avenue is close to numerous key residential developments and will truly enhance the shopping and entertainment offering in Dubai. We believe that this partnership will impact our business goals positively.”

Nakheel is focussing on growing its retail portfolio, which currently includes 10 new large-scale developments such as Nakheel Mall, The Pointe and Golden Mile in Palm Jumeirah, and Deira Mall and Night Souk in Deira Islands, and other smaller-scale community retail centres.

In total, the company has over 11 million square feet of leasable retail space in the pipeline, in addition to the 2.5 million already in operation at its Dragon Mart and Ibn Battuta Mall developments.

In April, Nakheel confirmed that it is planning to undertake 23 million sq ft of new residential and leisure projects worth Dhs14 billion over the next three years.