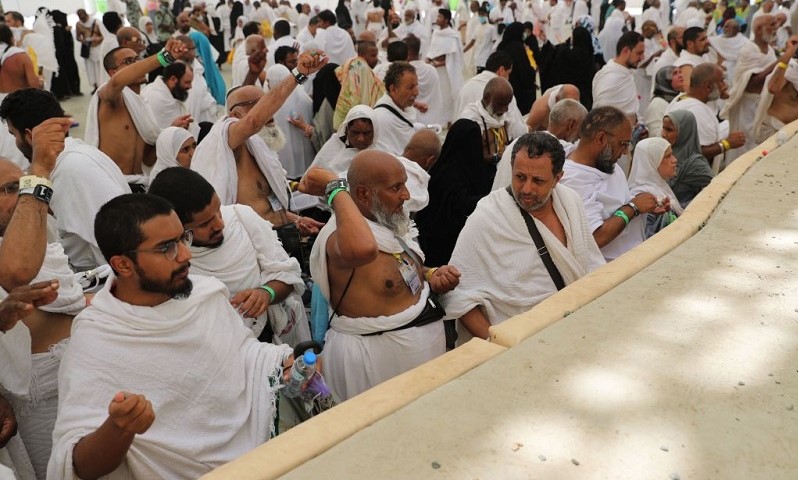 More than 2 million Muslim pilgrims hurled pebbles at a giant wall in a symbolic stoning of the devil on Tuesday, the riskiest stage of the annual hajj pilgrimage in Saudi Arabia where hundreds died in a crush three years ago.

Clad in white robes signifying a state of purity, men and women from 165 countries converged on Jamarat to perform the ritual from a three-storey bridge erected to ease congestion after earlier stampedes.

They will return to the bridge over the next two days for more stoning before returning to Makkah to pray at the Grand Mosque at the end of hajj.

The kingdom stakes its reputation on its guardianship of Islam’s holiest sites – Makkah and Madinah – and organising the world’s largest annual Muslim gathering, which retraces the route Prophet Mohammad took 14 centuries ago.

It has deployed more than 130,000 security forces and medics as well as modern technology including surveillance drones to maintain order.

“The police assistance and the services were all extraordinary. Praise God, I am very happy and God willing our Lord will provide for us again,” said Jordanian Firas al-Khashani, 33.

The authorities redesigned the Jamarat area after stampedes in 2004 and 2006 killed hundreds of pilgrims, and the frequency of such disasters has greatly reduced as the government spent billions of dollars upgrading and expanding hajj infrastructure and crowd control technology.

But with so many participants, panic is a constant danger.

The 2015 crush killed nearly 800 people, according to Riyadh, when two large groups of pilgrims arrived together at a crossroads on a road leading to the stoning site.

Counts by countries of repatriated bodies, however, showed more than 2,000 people may have died, more than 400 of them from Iran, which boycotted hajj the following year. It was the worst disaster in at least a quarter century.

Saudi authorities said at the time that the crush may have been caused by pilgrims failing to follow crowd control rules, and King Salman ordered an investigation but the results were never announced.

Some 86,000 Iranians are attending this year amid a diplomatic rift between Tehran and Riyadh, which are locked in a struggle for regional supremacy. Their dispute was exacerbated by the 2015 crush.

An Interior Ministry spokesman said the pilgrims this year were adhering to a strict timetable in order to reduce congestion. The Health Ministry reported no outbreak of disease so far, a perennial concern.

More than 2.37 million pilgrims, most of them from abroad, have arrived for the five-day ritual, a religious duty once in a lifetime for every able-bodied Muslim who can afford the journey.

“It is a beautiful feeling,” said Egyptian Hazem Darweesk, 31. “The beauty of it is in the difficulty of performing it. It brings you closer to God.”

King Salman and his son Crown Prince Mohammed bin Salman received well-wishers on Tuesday at a palace gathering attended by royals, clerics, military leaders and distinguished guests, marking the first day of Eid al-Adha, or the feast of sacrifice.

“Our country’s greatest honour is to serve God’s guests,” the 82-year-old monarch tweeted. “On Eid al-Adha, I ask God to complete the pilgrims’ hajj and to perpetuate the goodness and peace for our nation and all other countries.”

Saudi authorities have urged pilgrims to set aside politics during the hajj but violence in the Middle East, including wars in Syria, Yemen and Libya – and other global hotspots – remain on the minds of many.

Some worshippers criticised Arab leaders for failing to block President Donald Trump’s decision to move the U.S. Embassy to Jerusalem after he recognised the city as Israel’s capital.

Pilgrimage is also the backbone of a Saudi plan to expand tourism under a drive to diversify the economy away from oil. The hajj and year-round umrah generate billions of dollars in revenue from worshippers’ lodging, transport, fees and gifts.

The authorities aim to increase the number of umrah and hajj pilgrims to 15 million and 5 million respectively by 2020, and hope to double the umrah number again to 30 million by 2030.

Pakistani Fayas Shahid, 30, said he felt relieved after nearing the end of the exacting journey: “May Allah accept my hajj and give everybody a chance to everybody to perform hajj.”