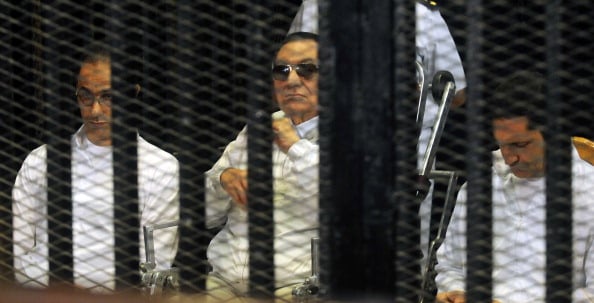 Three leaders of Egypt’s Muslim Brotherhood and the movement’s former arch-foe Hosni Mubarak faced separate trials on Sunday on similar charges of involvement in the killing of protesters.

With Egypt now under an army-installed government after last month’s overthrow of Islamist President Mohamed Mursi, local media seized on the symbolism of scheduling both sessions on the same day. “Trial of two regimes,” headlined al-Shorouk daily.

In the end, Mohamed Badie, the Brotherhood’s “General Guide”, and his deputies did not appear at the opening of their trial for security reasons, a judicial source said. Citing their absence, the judge adjourned the proceedings until Oct. 29.

The case against Badie, Khairat al-Shater and Rashad Bayoumy relates to unrest before the army removed Mursi on July 3 and detained him in an undisclosed location.

More than 1,000 people, including about 100 soldiers and police, have died in violence across Egypt since Mursi’s fall, making it the bloodiest civil unrest in the republic’s 60-year history. Brotherhood supporters say the toll is much higher.

Mubarak, who left prison on Thursday after judges ordered his release, appeared in a courtroom cage in a wheelchair, wearing sunglasses and dressed in white, along with his jailed sons, Gamal and Alaa, and the former interior minister, Habib al-Adly.

After a hearing that lasted about three hours, the judge set the next session for Sept. 14, pending further investigation.

The former president was sentenced to life in prison last year for complicity in the killing of protesters during the 2011 revolt against him, but an appeals court ordered a retrial.

A helicopter flew Mubarak to the court in the Police Academy on the eastern outskirts of Cairo from a military hospital where he was placed under house arrest after his release from jail.

The government used a state of emergency it declared earlier this month to place Mubarak under house arrest, apparently to forestall any public anger if he had simply walked free.

Mubarak-era prime minister Ahmed Nazif was released earlier this year because of a limit on pre-trial detention. Former Housing Minister Ibrahim Soliman, sentenced to eight years in jail on corruption charges after the 2011 uprising, was released on Sunday pending his appeal, judicial sources said.

The trial of the Brotherhood leaders signals that Egypt’s new rulers intend to crush what they have portrayed as a violent, terrorist group bent on subverting the state.

The military contends it was responding to the people’s will, citing vast demonstrations against Mursi, who was criticised for accumulating excessive power, pushing a partisan Islamist agenda and mismanaging the economy.

Charges against Badie and his aides include incitement to violence in connection with an anti-Brotherhood protest near the group’s Cairo headquarters on June 30 in which nine people were killed and 91 wounded. The 70-year-old Brotherhood chief was detained last week. Shater and Bayoumy were picked up earlier.

Mohamed Gharib, one of the lawyers defending the three Brotherhood leaders, said the trial was less an effort to try the suspects on the facts of the case than an attempt by the military to “get rid of its political foes”.

Gharib said Badie had been beaten during his arrest, losing his false teeth and glasses in the process, though pictures issued soon after his arrest did not show serious injuries.

“Justice has been turned upside down. The real victims are being hauled to jails and accused of inciting killing,” he said.

Pro-Mursi crowds staged small marches on Friday, but the Brotherhood’s street power appears to have faded after the round-up of its leaders and the bloody dispersal of protest camps set up in Cairo to demand the president’s reinstatement.

A pro-Mursi alliance known as the National Coalition to Support Legitimacy and Reject the Coup called for a campaign of civil disobedience to paralyse Egypt, “retake the revolution” and reverse the army takeover.

A day earlier, in a sign of confidence, the government relaxed a night-time curfew, saying it would start at 9 p.m. (1900 GMT), instead of 7 p.m. The month-long curfew was imposed on Aug. 14, the day the pro-Mursi protest vigils were stormed. Banks and financial institutions are working normally again.

Castigating foes of the army, a spokesman for interim President Adly Mansour said Egypt had undergone difficulties in the past two months, but had reached a “safe area”.

“Those who tried and are still trying to break the Egyptian army will fall alongside the Tatars and Crusaders and all other enemies in the same dustbin,” said Ahmed al-Muslimani.

The army has announced a roadmap back to democracy that involves revising the constitution adopted under Mursi in late 2012, with parliamentary and presidential elections to follow.

Changes proposed by a government-appointed legal panel would scrap last year’s Islamic additions to the constitution and revive a Mubarak-era voting system. Islamists and liberals have expressed alarm about the suggestions.

Egyptian authorities arrested an Islamist militant, saying he was close to the brother of al Qaeda leader Ayman al-Zawahri and had supplied arms to Mursi’s supporters.

Security sources said the authorities described the man, Daoud Khairat, as the “right-hand man” of Mohamed al-Zawahri, who was himself arrested in Egypt on Aug. 17. The Brotherhood denies using firearms and says it has no links to al Qaeda.

Earlier, the army said it had captured five militants in Sheikh Zuweid, a town in North Sinai, saying they had been involved in attacks on security forces in the area.

A son of senior Brotherhood politician Mohamed al-Beltagi was also detained in the southern city of Beni Suef, the security sources said, in a continuing wave of arrests.