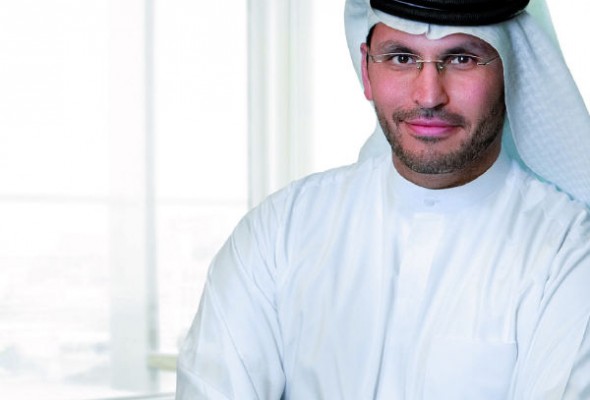 For an Emirati who’s not a member of Abu Dhabi’s ruling royal family, Khaldoon Al Mubarak is remarkably influential. Photos of him with Barack Obama and Donald Trump decorate his desk. Around the time of our interview with him in October, he’d hosted Russian President Vladimir Putin and caught up with former U.S. Secretary of State John Kerry and retired U.S. Army General David Petraeus.

From a tragic childhood – his father was assassinated when he was 8 years old – Al Mubarak, who turns 44 in January, has risen to become one of the ruling Al Nahyan family’s most trusted advisers. He’s also chief executive officer of Mubadala Investment Co., a $229bn state-owned holding company. His broad remit – it even includes the chairmanship of Manchester City Football Club – is particularly important now as Abu Dhabi seeks to reduce its dependence on oil and Mubadala works to diversify its investments.

Al Mubarak, wearing a traditional white ankle-length kandura, says his challenge is to navigate the transition. “A divorce from oil and gas is not going to happen,” he says. “This is always going to be a core part of our economy. How do you get the best out of that with a view to the future, while at the same time building the rest? My focus is on building the rest.”

Power in Abu Dhabi, the wealthiest of seven sheikdoms that make up the United Arab Emirates, flows from Sheikh Mohammed bin Zayed Al Nahyan, the UAE’s de facto ruler and chairman of Mubadala. Al Mubarak, says Christopher Davidson, associate fellow of the Royal United Services Institute in London, “represents the new generation of savvy urbane technocrats the crown prince has sought to surround himself with.”

Abu Dhabi, with a population of about 2.9 million, is home to roughly 6 per cent of the world’s oil reserves. As it adjusts to a less petrocentric future, the emirate’s financial industry has begun a wave of consolidation that’s seen the megamerger of two of its largest banks and three of its four investment funds. Al Mubarak has been central to these efforts as chairman of the Abu Dhabi Executive Affairs Authority, which advises the crown prince, known colloquially as MBZ, on strategic issues.

Mubadala is part of the evolution. The fund, started as a means of diversifying the economy by attracting expertise and jobs to the emirate, is now a global powerhouse. This year alone, it’s invested in Greek fish farming, Europe’s biggest electric-scooter-sharing company, and a Canadian data center. Al Mubarak has sought to put a new gloss on the emirate’s sometimes tangled financial affairs. Mubadala was formed in 2017 by the merger of its predecessor, Mubadala Development Co., and International Petroleum Investment Co. That year, Al Mubarak, who’d been CEO of the predecessor company since 2002, took over the new holding company.

In doing so, he inherited IPIC’s troubles. IPIC had gotten caught up in a series of investigations over whether and how money flowed from the Malaysian government’s scandal-ridden 1MDB development company through fraudulent shell companies to corrupt officials. Today, across the way from Mubadala’s fairly modest headquarters, IPIC’s flashy office tower looms as a reminder of petrodollar-fueled excesses before prices nose-dived in 2014.

Mubadala Investment reported total comprehensive income of Dhs12.5bn ($3.4bn) for 2018, a 21 per cent increase from the previous year. Under Al Mubarak, the fund has been selling some of its more mature assets and exploring new sectors. Technology is a “priority area where I personally spend a lot of time,” he says.

In 2017, Mubadala committed $15bn to SoftBank Group Corp.’s $100bn Vision Fund. Al Mubarak says he’s monitoring the fund’s performance before deciding whether to sign up for the second round. “Tech is inherently risky,” he says. In November the Vision Fund reported a loss of about $9bn on its stake in We Co. and other tech companies.

In an emirate as rigidly hierarchical as Abu Dhabi, Al Mubarak’s ascent was far from preordained. His father, a UAE diplomat, was living in Paris as ambassador to France when he was killed by Palestinian militants in 1984. Al Mubarak was raised by his grandfather, the UAE’s first chief justice, and became close to the royal family.

After graduating from Tufts University in Massachusetts in 1997, he started out as a sales executive for Abu Dhabi National Oil Co. and eventually landed at Mubadala Development as its first CEO. There, and later at Mubadala Investment, he’s overseen a series of high-profile investments in companies such as EMI Music Publishing, General Electric, and Carlyle Group.

Al Mubarak has had his share of narrow escapes. In 2012, Mubadala Development invested $2bn in the business empire run by the Brazilian serial entrepreneur Eike Batista, who at the time was one of the world’s richest people. When Batista’s edifice collapsed later that year, Mubadala was one of the few investors to come out relatively unscathed. (The fund sold its stake in the company that owns Burger King, a holding acquired through the Batista deal, for a substantial profit this summer.) “That was a challenge,” Al Mubarak says. “If it wasn’t for the well-structured deal that we did, the outcome would have been very difficult – substantially negative.”

As the photos and assorted memorabilia in his offices suggest, Al Mubarak’s interests extend well beyond the financial world. There’s a framed, sky-blue soccer jersey: a nod to Man City, which, thanks to massive cash infusions from Abu Dhabi, has become one of the world’s most successful soccer teams. There’s a scale model of a Ferrari: Mubadala once had a stake in the automaker, and Al Mubarak negotiated the deal that brought the Grand Prix Formula One race to Abu Dhabi. And there’s a touch of humor: a Darth Vader bust in a traditional Arab headdress.

These items – along with two imposing paintings, one French, one Korean – point to a man with deep connections inside and outside the Gulf. Last year, Al Mubarak became a special envoy to China, a new post signaling growing ties between Beijing and the Gulf in oil and gas, banking, and logistics.

In the end, the most telling photo of all is probably the one of Al Mubarak with MBZ, given that the source of Al Mubarak’s power is closer to home. “I’ve been lucky to work with very incredible people throughout my professional career, incredible leaders,” he says. “This starts with His Highness.”