The renewable energy sector no longer remains at the periphery as an industry for social good alone; but has emerged as a profitable alternative to conventional sources of power generation.

The case is even stronger for the GCC, which is now at crossroads as the oil slump extends into its third year. A shift to renewable energy will not only reduce the cost of power production and carbon emissions but also free up more oil for exports. We envisage renewable power to be a significant contributor to the economic progress of the region and strongly believe that it is time to sit up and take notice of this sector. But where the GCC stands in comparison with the rest of the world in this segment?

Globally, renewable power generating capacity saw an increase of 9 per cent in 2016 compared to the previous year. Investment flow towards renewables has been steady with the spending exceeding $200bn every year for the past seven years. New investment of $264.8bn was seen in 2016 with the main focus on solar power closely followed by wind power. In the same year, renewables accounted for an estimated 62 per cent of net additions to global power generating capacity.

This puts into perspective the current state of renewables in the GCC. While there is a huge scope for improvement, we need to take into consideration the fact that historically, power generation through fossil fuel has been cost-effective for GCC countries that have an abundance of these resources. With advancements of renewable energy technology and declining costs in the recent years, renewable energy now looks more economically viable.

Globally, there has been a reduction in Levelised Cost of Energy (LCOE) ranges of renewable energy sources between 2010 and 2016 with solar photovoltaic’s weighted average LCOE coming down by more than 50 per cent from $350/MWh to $140/MWh. This brings the cost of power production by solar energy within the range of fossil fuels.

Renewable energy potential is high in the GCC, particularly for solar projects with nearly 90 per cent of the investments in GCC flowing towards them. Solar insolation levels in the region are among the highest in the world (as high as 6.5 kWh/m² per day, according to the IRENA Yearbook 2016) making it a favourable region for solar power generation.

Cost of production of renewable energy is competitive in the GCC despite the recent fall in the prices of fossil fuels. The LCOEs of the solar PV projects at utility scale in the GCC region are comparable to the LCOE of electricity generation from oil when oil is priced at $20 per barrel. With crude oil priced at around $50 per barrel now, the case for greater integration of solar PV in the oil-based power sectors is strong.

Saudi Arabia, the world’s biggest exporter of crude oil, is moving towards the construction of its first utility-scale wind-power project at Dumat Al Jandal. It also plans to develop 30 solar and wind projects over the next decade as part of a $50bn programme to increase power generation and reduce oil consumption.

Kuwait, one of the earliest advocates of renewable energy in the Middle East, plans to meet 15 per cent of its energy requirements from renewable resources by 2030. Construction is now in progress for Phase I of the 2GW Shagaya Renewable Energy Park. Al-Abdaliyah Integrated Solar Combined Cycle plant is another power generation project under construction and has an overall capacity of 280 MW. Kuwait has also planned to issue a tender to build the estimated $1.2bn Dibdibah solar power plant in the first quarter of 2018.

The UAE is investing $163bn in clean energy projects to ensure that half of the country’s power needs are generated from renewable sources by 2050. Dubai’s 13MW first phase of the Mohammad Bin Rashid Al Maktoum Solar Park received the International Renewable Energy Certificates (I-REC) issued in 2017, making it the first in the region to adopt the I-REC system. I-REC is a voluntary system for international trade in renewable energy certificates.

Emerging trends in the GCC

The outlay required is massive for development of the renewable infrastructure. One of the emerging financing tools that could be beneficial is green bonds, which fund environment friendly businesses and assets.

Issuance of green bonds doubled to $82.6bn in 2016 from 2015 levels, supported by the successful negotiation of the Paris Agreement. India’s Greenko raised $1bn in July 2017 in an overseas debt sale, making it Asia’s largest green bond offer to date. In the Middle East, National Bank of Abu Dhabi issued $587m five-year green bond on March 2017 to fight climate change – the first ever green bond from a Middle East issuer.

Another trend that has been catching up in the GCC is the concept of green buildings. Green building is the practice of creating structures in a resource efficient way without having any negative impact on the environment. Dubai has been taking measures to promote this by giving permits to buildings only if they are compliant to green building standards. Some 1,433 green building projects have been completed in Dubai alone since 2010, helping the UAE rank ninth globally for green buildings outside the US, according to a report from the Green Building Council.

The signs are pretty clear that the path has been paved for the transition from oil and gas towards renewable energy sources in the GCC. 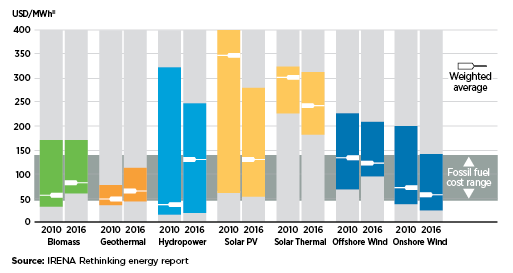 Naturally favourable geographic conditions and a reduced cost of power generation favour the paradigm shift from total non-renewable energy dependency towards a more balanced dependency between renewable and non-renewable sources. And although the realisation has been late in the GCC when compared to other developed nations, it’s better late than never. With better visibility, improvements in technology, private partnerships and stronger government commitments, the outlook for renewables in the region is certainly optimistic.