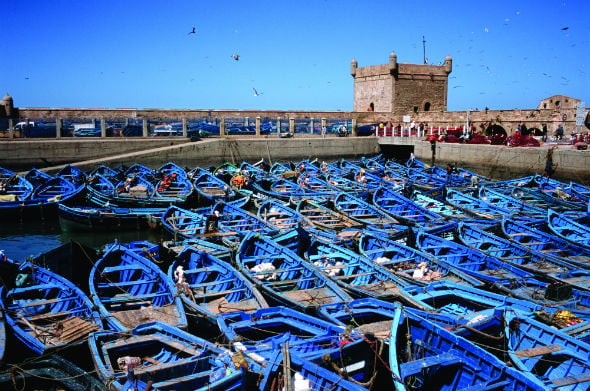 Fascinating, colourful, quirky … Morocco has 1001 attributes for a vacation but relaxation is not top of the list, particularly for those bracing the souks in search of a bargain.

So, it was an education to venture west from Marrakech in search of sea breezes, tree-climbing goats, the elixir of youth and an endless beach.

Our destination was Essaouira, a practically unpronounceable name but a destination that delivers on those essentials of a holiday — good food, great hotels, friendly folk and an ambience so laid-back it was nearly comatose.

Located on the atlantic coast some two hours or so drive from Marrakech, the town originated as an 18th century fortress port, built to link saharan trade routes with the outside world, and today it is home to a colourful fishing fleet that provides a sensory experience with foraging cats and gulls, a forest of masts and flaking turquoise wooden hulls, and a nose-twitching aroma of fish in all its fragrant glory.

Equally memorable are the town ramparts, sturdy walls built to repel both atlantic storms and pirate raids, dotted with cannons and now part of the daily perambulatory route for both locals and visitors.

Above all, Essaouira is a place to idle, starting from early morning coffee in Moulay Hassan square, where the plane trees and pavement cafes hint at French antecedents in the town history … and a thé menthe kickstarts the day if a café au lait doesn’t fit the bill.

to work up an appetite for lunch, perhaps a stroll around the medina, through the narrow lanes between charming if crumbly high-storey edifices — where salesmanship is no qualification for the souk stall holders who prefer to let their wares speak for themselves than the more common hard sell.

More reminiscent of the 21st century, there has been a proliferation of galleries and restaurants, but pots, textiles, the inevitable leather slippers and bags, spices and carpets, jewellery and woolly hats are among the handicrafts on offer.

With a mooching crowd that can comprise djbella-clad crones, French tourist groups, Moroccan families and t-shirted youths, refreshingly the emphasis is not on 21st century mass rip-off tourism, for Essaouira has yet to make it big in the pages of the global tour operators.

it was fleetingly famous as a hippie hang- out, principally due to the fact that Jimi Hendrix visited in 1969 and that the beaches are long, deserted and life was cheap — and the latter was an incentive for film location scouts who recommended the location for epics from alfred Hitchcock’s The Birds through to the more recent Alexander and Gladiator.

Moroccan visitors have made up the majority of more recent visitors, again attracted by the sand, sea and sunshine, but now with a major tourism and golf development underway and a sprinkling of hotel brands setting up stall there, the spotlight is on Essaouira to add a new dimension to the Morocco magic. And, despite the indolent appeal of the town, there are plenty of activities in the surrounding region to extend a break to a week, and beyond.

In seven days last summer, I submitted to the attentions of a Moroccan masseuse several times; did a 4WD tour along the coast, tracking down the famed tree-climbing goats and forests of argan trees; visited an argan oil co-operative to be sold soaps, oils and more; went riding at a smart clip along the deserted beach; visited the photogenic Jimi Hendrix café (which he didn’t visit apparently); survived a Moroccan cookery class and ate the results; found the ultimate hideaway beach café for the freshest fish and salad; shopped in an art gallery or two and tried on every Moroccan slipper in town (didn’t succumb this time) … as well as totally enjoyed a ‘city’ tour in the company of rashadiya, a multilingual guide and fan of British TV detective series who unveiled all the quirks of this very individual town.

Taken at a leisurely pace, with copious doses of ozone and blissfully balmy sunshine, this weekly calendar offers up something for everyone — only go before the masses arrive.