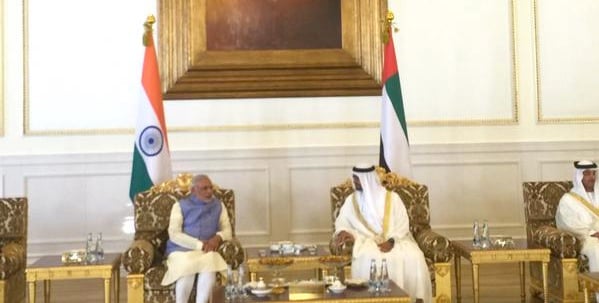 Indian Prime Minister Narendra Modi visited a labour camp in Abu Dhabi on Sunday to highlight New Delhi’s concern about the welfare of its migrant workers helping to build glitzy skyscrapers, hotels and museums in the oil-rich Gulf state.

Modi’s two-day visit to the United Arab Emirates coincides with international calls to improve workers’ conditions in Gulf countries, which rely on Asian labour for mega projects such as the World Expo 2020 in Dubai and the FIFA World Cup 2022 in Qatar.

Some 2.6 million Indians live and work in the UAE, according to Indian embassy figures. The embassy estimates about 60 per cent of those are blue-collar workers.

About 200 workers broke into applause when Modi arrived at an indoor basketball court at the labour camp in the Industrial City of Abu Dhabi. Modi chatted with the workers, enquiring about the place and their welfare and jobs, but made no comments to the media.

Modi was due to attend a public event in Dubai on Monday with some 40,000 Indian expatriates expected to attend.

“He wants to convey that the safety, security and welfare conditions for Indian workers should not be ignored,” a senior Indian government official told Reuters in New Delhi.

“The Indian government is aware that the UAE will employ thousands of Indian workers to organize the World Expo 2020, but after the recent Qatar experience, the government wants to send a clear message that India will not allow rampant exploitation of its workers.”

In November, India launched a campaign for higher wages for its workers in the Gulf states. Indian diplomats raised the minimum salaries they recommend because of higher living costs.

UAE officials, including the labour minister, have said that labour legislation in the country is in line with the UAE constitution. Laws regulate the labour market, providing protection of workers and their rights, they said.

Several measures, including mid-day breaks for workers in the country’s sweltering summer heat, better healthcare facilities and accommodation have been provided across the UAE. But rights groups think a lot more needs to be done.

“Lack of proper regulation by the authorities in both India and the UAE of the booming migrant-worker recruitment industry, including visa brokers, has allowed rogue recruiting agents to cause serious human rights abuses with impunity,” Salil Shetty, secretary-general of Amnesty International, told Reuters.

“Some welcome improvements by the UAE over the last decade have been put in serious doubt by the crackdown on labour activists and failure to carry out meaningful reform of the kafala system, further increasing the vulnerability of migrant workers to human rights abuses.”

Modi had earlier toured the Sheikh Zayed Grand Mosque in Abu Dhabi, in what analysts said was an attempt to put behind him allegations he had done nothing to save Indian Muslims during 2002 riots in which hundreds were killed.

“Modi’s visit to the Grand Mosque is a clear signal that he wishes to bury his own communalist baggage and build on India’s pluralistic reputation and highlight Islam’s role in Indian history,” Kadira Pethiyagoda, visiting fellow in Asia-Middle East Relations Brookings Doha Center, told Reuters.

Modi’s two-day visit to Abu Dhabi is the first by an Indian prime minister since Indira Gandhi’s trip in 1981.

He will also be seeking to engage Abu Dhabi, one of the richest sovereign wealth funds in the world, to invest in India as well as expand cooperation in the energy sector. Abu Dhabi accounts for 9 per cent of India’s energy needs and India wants to increase that, the official said.

“The orientation of the Gulf countries has always been towards U.S. and Europe, but the prime minister wants to highlight the benefits of investing in India and he wants to engage Abu Dhabi on long-term projects,” the official said.

“The prime minister’s visit is of strategic significance in our bilateral relations and follows on the heels of growing diplomatic, economic, energy and defence cooperation between our two countries,” UAE state news agency WAM quoted him as saying.

There were opportunities for bilateral security cooperation against extremists, he said.