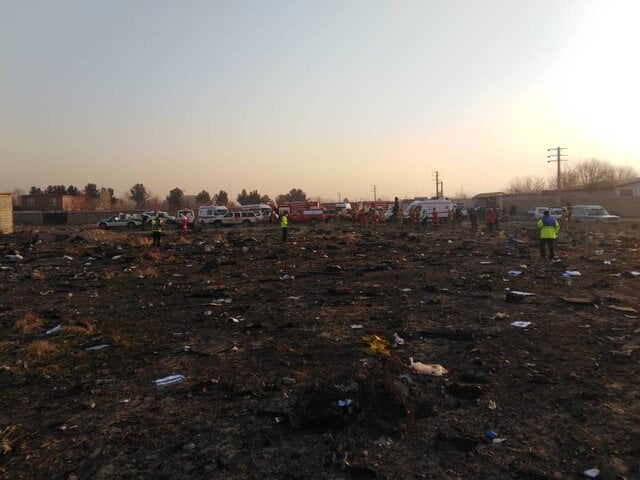 U.S. intelligence officials increasingly believe that the Ukrainian jet that fell from the sky after taking off from Tehran on Wednesday was shot down by a missile, according to two people familiar with the evidence.

Two surface-to-air missile launches were detected from an Iranian battery minutes after the jet took off, followed by an explosion near the plane, said one of the people. The jet carrying 176 people began an abrupt descent and crashed in a massive fireball, said the person.

Ukraine International Airlines Flight 752 plunged from the sky about two minutes after a pre-dawn takeoff. The Boeing Co. 737-800 was on fire as it plunged, according to witnesses on the ground and in other aircraft, cited in a preliminary Iranian report on the crash.

The U.S. government has obtained evidence indicating that the rapid descent was not the result of a mechanical issue on the plane or errors by the pilots, said the people, who asked not to be named discussing intelligence reports.

Two SA-15 missiles are suspected of crippling the jet, said one of the people. The Russian-made missile, also known as a Gauntlet or a Tor, is a short-range weapon designed to attack planes, helicopters and other airborne targets. The launches were detected by a U.S. spy satellite and occurred from a known missile battery near the airport, the person said.

Boeing rose as much as 3.1 per cent and traded up 1.8 per cent to $337.24 at 12.39pm in New York on the news, previously reported by Newsweek and CBS citing sources they didn’t identify. If the plane was brought down by a missile strike it would relieve concerns of a mechanical failure that could affect other Boeing planes.

Alireza Miryousefi, the spokesman for the Iranian mission to the United Nations in New York, didn’t immediate reply to a phone call and a request for comment via text message. Hassan Rezaeifar, head of an Iranian joint investigation commission on the crash, denied earlier Thursday reports that evidence of a missile strike had been found at the crash site, according to the semi-official Fars news agency.

The intelligence assessment is consistent with what some aviation accident experts have said. The apparent rapid spread of the fire combined with the sudden halt of radio transmissions from the plane after a normal climb aren’t consistent with previous crashes, said Jeffrey Guzzetti, the former head of accident investigations at the Federal Aviation Administration.

While Iranian officials initially said they suspected a problem with one of the plane’s engines, they retracted that in a preliminary report issued Thursday. The government also took the unusual step of setting up an investigative group to examine whether “any unlawful actions” initiated the fire on the plane, the preliminary report said.

The UK called for a full investigation into the crash.

“There needs to be a full, credible and transparent investigation into what happened. We want to see that happen as soon as possible,” Jamie Davies, spokesman for Prime Minister Boris Johnson, told reporters in London. “Reports we’ve seen are extremely concerning and we’re looking into them.”

Johnson spoke with Ukrainian President Volodymyr Zelenskiy on Thursday and expressed his condolences, Davies said. “The prime minister offered support and will be working with Ukraine on how best to support them.”

US President Donald Trump, speaking to reporters in Washington on Thursday, said “I have my suspicions” about why the plane went down but said he didn’t want to say what those suspicions are.

“It was flying in a pretty rough neighbourhood,” Trump said. “Somebody could have made a mistake.”