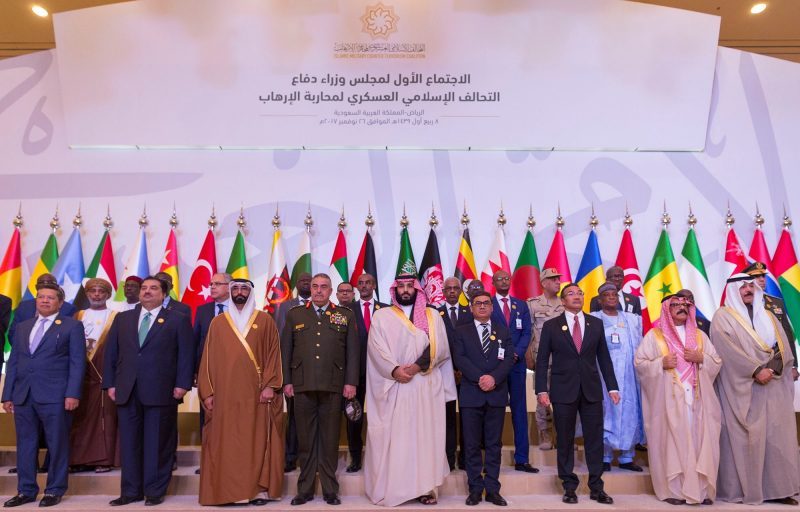 Saudi Arabia’s Crown Prince Mohammed bin Salman has said that a new military coalition will fight terrorism both in its “ideology and violence”, and that “we will chase it until terrorism has disappeared from the face of the earth.

The Crown Price was speaking in Riyadh today (Sunday) at the inaugural meeting of the Islamic Military Counter Terrorism Coalition – group of defence ministers, diplomats and leaders from 41 Muslim-majority countries.

“This meeting is very important,” he added. “We haven’t had good co-ordination between each other – today that lack of communication ends because of this coalition.

“Today terrorism and extremism isn’t just the biggest danger only because of it’s killing of innocent people and its rampant dissemination of hatred. One of the biggest dangers is also in how it has sullied the reputation of our religion and our ideology, and that’s why we won’t allow it to get further than today.”

According to the coalition’s official website, the group’s core purpose is to “increase co-operation between Islamic countries on the combating of the financing of terrorism and to counter radical Islamic ideology”, and the first congress comes just days after a terrorist attack on a mosque in Egypt’s North Sinai province killed more than 300 people.

The coalition’s member nations will offer the co-operation of their troops, as well as jointly financing the group. Qatar, which signed up to the coalition upon its inception in December 2015, did not attend the meeting, with Saudi Arabia and other Arab countries boycotting the country over its links to extremist groups.

Pakistan’s General Raheel Sharif, the military commander of the coalition, told the attendees that almost 70,000 terror attacks had been made in recent years, killing 200,000 people, and that many countries in the Islamic world were the worst affected.

“The vision of the IMCTC is to have a collective response to terrorism,” he said.

“IT will provide a platform to the member-countries to fight terrorism. The IMCTC is not against any country, sect or religion.”

The general explained that efforts would be made to promote moderate Islam, while Dr Mohammad bin Abdul Karim Al Issa – Secretary General of the Muslim World League, based in Makkah – said: “Terrorist thought is alien to the message of Islam and this coalition will root out terrorism.