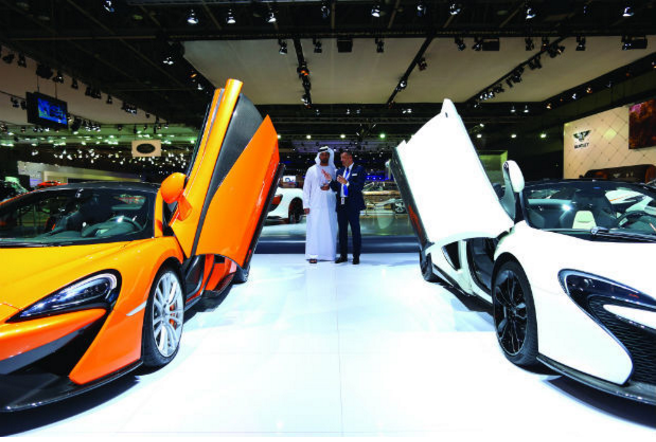 Major automotive companies operating in the Gulf Cooperation Council have said that growth slowed in the past 18 months due to the weak global economy and low oil prices.

Speaking to Gulf Business on the sidelines of the Dubai Motor Show, Nissan Middle East managing director Samir Cherfan admitted that the entire industry was witnessing a slowdown.

However, he added that demand in the United Arab Emirates and Saudi Arabia was still positive when compared with markets like Oman, Kuwait, Qatar and Bahrain.

A recent survey by online car seller Carmudi showed that only 28 per cent of car dealers in the Middle East reported an increase in sales as a result of the changing economic climate in the region. In addition, 52 per cent reported that sales had decreased over the past 12 months.

In response, car companies were attempting to rev up sales demand for their core products and new product lines.

McLaren’s regional director for Middle East and Africa Ian Gorsuch said: “We’ve just launched our sports series, which moves us into a different price segment. This means customers can now own a McLaren for just Dhs 700,000 even as our other car values can go up to over Dhs 11m.

“We have therefore moved into a new customer segment governed by different market dynamics. The way in which this segment operates is very different to the people we’ve been traditionally selling to over the years,” Gorsuch added.

Social media had proven to be an effective way to lure car customers. According to the Carmudi survey, 80 per cent of new car customers and almost 100 per cent of used car buyers started their car shopping experience online.

“We are approaching social media rather than just newspaper advertisements or television commercials,” said French car company Peugeot’s Middle East and Sub Saharan Africa executive director Philippe-Jean Lafond. “We are not a major brand and our marketing budgets cannot match the big brands so