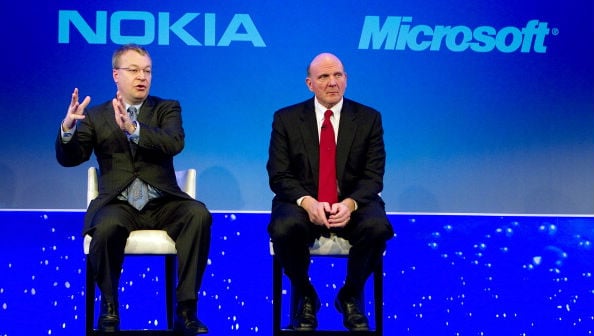 Under the terms of the agreement, the US tech giant will pay 3.79 billion euros to purchase substantially all of Nokia’s Devices & Services business and 1.65 billion euros to license Nokia’s patents. It is also buying the rights to use Nokia’s mapping services.

Microsoft will use its overseas cash resources to fund the transaction, it said in a statement.

The transaction, expected to close in the first quarter of 2014, is subject to approval by Nokia’s shareholders and regulatory approvals.

The Finnish phone-maker will retain its patent portfolio and will grant Microsoft a 10-year license to its patents at the time of the closing.

Nokia’s shares jumped 45 per cent following news of the deal.

Once a dominant player in the mobile phone marketplace, Nokia has rapidly conceded market share to manufacturers such as Apple and Samsung in the last few years. Its market share has dropped from 40 per cent share of the handset market in 2007 to 15 per cent, with just a three per cent share in smartphones.

The Finnish manufacturer made a loss of $150 million in the second quarter of the year, with sales falling 24 per cent year-on-year to 5.7 billion euros. The company sold 53.7 million mobile phones during the quarter, down 27 per cent from Q2 2012.

The new move will provide a much-needed boost to both the companies, said officials.

“It’s a bold step into the future — a win-win for employees, shareholders and consumers of both companies,” said Steve Ballmer, Microsoft CEO.

“Bringing these great teams together will accelerate Microsoft’s share and profits in phones, and strengthen the overall opportunities for both Microsoft and our partners across our entire family of devices and services.”

As part of the new deal, several senior Nokia executives including CEO Stephen Elop, who has worked with Microsoft in the past, will return to the US firm as head of its mobile devices business.

“Given our long partnership with Nokia and the many key Nokia leaders that are joining Microsoft, we anticipate a smooth transition and great execution,” said Ballmer.

“With ongoing share growth and the synergies across marketing, branding and advertising, we expect this acquisition to be accretive to our adjusted earnings per share starting in fiscal year 2015, and we see significant long-term revenue and profit opportunities for our shareholders.”