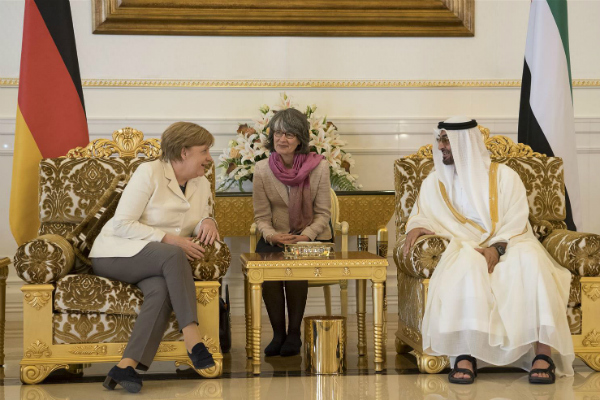 German Chancellor Angela Merkel said on Monday she hopes the European Union and the six Gulf Cooperation Council (GCC) countries can finally complete a free trade agreement and that she would discuss the issue with Abu Dhabi’s crown prince.

Germany, which relies on foreign trade for half its gross domestic product, fears that the protectionism backed by US President Donald Trump and the fallout from Britain’s vote to leave the EU posed global economic risks.

“I’ll be talking with Crown Prince Sheikh Mohammed bin Zayed al-Nahyan about this question,” Merkel said on Monday before her meeting. “The issue at hand is how to intensify the economic relations between the two regions.”

On a trip to Saudi Arabia and Abu Dhabi, Merkel told reporters that the economic relations between the two regions needed to be strengthened. She said she had also discussed the issue on Sunday on her visit to Saudi Arabia.

“I made it clear that a free trade agreement with the Gulf states would be of great interest from a European point of view,” Merkel said during her visit to Jeddah on Sunday.

She noted that the EU had made a new offer for an agreement but that the GCC states had not yet responded. Merkel said she had talked to King Salman about the issue on Sunday evening.

Trade between the EU and GCC amounted to EUR138bn in 2016, according to the EU. Exports from EU countries to the GCC were worth 100 billion euros and imports to the EU were worth 38 billion. Two-way trade has been growing steadily in the last decade.

The EU-GCC talks date back some 20 years. Little progress has been made lately.

In response to scepticism about free trade from President Trump, Germany has been urging the EU to speed agreements to open trade. Talks are underway with the GCC, China, India, Indonesia, Malaysia, Myanmar, the Philippines, Singapore, Thailand, Vietnam, Australia and New Zealand.

In March, Gulf officials said the six GCC states were pressing for an early agreement on free trade with Britain to secure preferential arrangements after Brexit and could have a draft agreement ready within months.

GCC states are trying to diversify their economies and boost non-oil trade after more than two years of low global oil prices that have hurt their finances. They export mainly oil, gas and related products to Western economies while importing a wide range of goods and services.