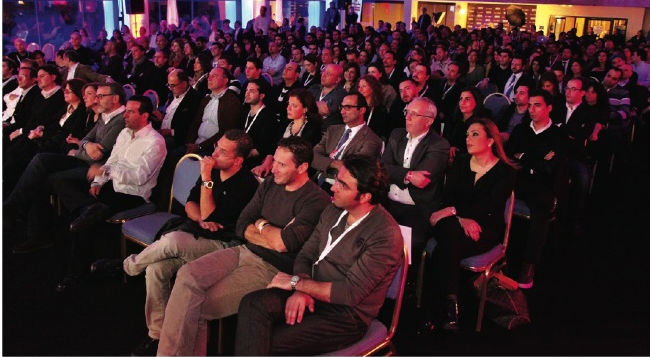 The ski slopes descending to the InterContinental hotel in Mzaar were relatively quiet this year, with bad weather causing treacherous conditions during the first two days of the festival. Inside, however, the Cristals were as they’ve always been – a hive of gossip and discontent centred on the hotel’s dangerously amenable bar.

In theory, the organisers of this year’s MENA Cristal Festival should be delighted with the way the three-day event unfolded, despite the weather.

There were 1,850 award entries compared with the 1,490 received last year, while delegate numbers were up from 695 last year to 750 according to figures supplied by the festival. The shift towards international jurors also continued, with only the corporate and PR and Arabic culture juries populated entirely by regional judges. There were also 25 countries represented, making it a truly regional event.

Over two nights of awards a total of 11 grand Cristals and 50 Cristals were awarded, with Mindshare named both media agency and media network of the year and Leo Burnett Beirut crowned agency of the year. JWT walked off with the network of the year title thanks to a strong performance across its Beirut, Cairo and Tunis offices, including a grand Cristal in the production category for Vodafone’s ‘Let nothing stop you’, while the accompanying seminars including a session with Austrian base jumper and Red Bull Stratos space diver Felix Baumgartner.

“Generally the quality of the seminars, the speakers and the content presented was of a much higher calibre than before,” says Vatche Keverian, CEO of JWT MENA. “You could see regional speakers tackling industry issues and challenges rather than chest drumming with self praise. There was a larger participation by international speakers and their content was world class. The highlight of the show was Felix, whose presence and interaction with the audience added a touch of inspiration.

“In spite of the highly competitive spirit – at times tainted by political wrestling – I felt the industry was more open to talk and come together on common ground. I hope we can make good on this and pull together to face challenges and raise standards at an industry level.

“Finally, and most importantly, the work – overall there is better work from the region for the region. I believe Arab creatives have gained confidence and are more comfortable in doing work that is truly Lebanese, Egyptian, Saudi, Kuwaiti or Tunisian in character rather than emulating the West or East. There seems to be an indigenous Arab style of advertising that is taking shape. What is most encouraging is that the work is mostly for big brands, though the share of NGO work is growing exponentially, but that is good for society and the soul of the industry.”

Not all agree with Keverian on the quality of work however. For example, Dani Richa, chairman and CEO of Impact BDDO Group MENA/Pakistan, was disappointed, for a couple of reasons. “I’m still not fully satisfied with the number of categories and juries simply because there is a huge number of awards given for a show this size, diluting the value of the award itself. Also, the work was a bit disappointing, especially after the region’s strong creative performance in 2012.”

Alex Martinez, managing creative director at JWT Barcelona, and a judge on the creative jury, says: “Our jury was a combination of multinational and multicultural points of view, with high profile professionals coming both from networks and independent agencies. So our discussions were more about the ideas and the way they were executed, than about who did them or where they came from,” he says.

“We were all looking for local insights, ideas which in their heart were related to local sensibilities. That’s where I guess there is a huge margin of improvement in the region. Not trying to imitate the international ‘made to travel’ ideas, but explore the roots of the local culture, local sense of humour, local insights. Those kind of ideas, when they are well executed and well explained, are much more captivating to an international jury.”

For Christian Djermakian, chief creative officer at Drive Dentsu, it was a festival of pros and cons. In the positive corner lie better organisation of the award ceremonies, international juries and the resurgence of Beirut as a creative hotspot.

“Having international and renowned jury members every year is heightening the level of the work submitted and this is good for the market as a whole,” he says. “We saw nice campaigns being awarded this year although, as always, there were a good chunk of ghost ads. [I was also] happy to see that the level of creativity in Beirut’s agencies in particular is picking up again, and noticed that, unlike other years, the awards were not distributed between two or three major players but, on the contrary, smaller agencies also did great work and had their share of the cake.”

As for the negatives: “I hope next year they will consider having a full international jury for corporate and PR to avoid all the gossip on that jury in particular. Also, I would have preferred to have more speakers and conferences tackling new trends and innovations related to the communication sector, plus more workshops for juniors.”

Whatever your opinion regarding the judging and the political machinations that often accompany the festival, one agency that had its best ever performance was Mindshare. “For years we had many concerns about the process and criteria used for awards shows, including those for the MENA Cristals, and we shared them with the three award show organisers in the region,” says Samir Ayoub, CEO of Mindshare MENA.

“We simply wanted transparency and fair judgment. We are glad that many of our concerns have been addressed, which encouraged us to push more for the awards’ entries.

“In early 2012, we set objectives for ourselves to be selected for the highest number of awards and also to be honoured as the top media agency of the year. A few months ago, we were the most-awarded agency at the Effies, and today we have the highest number of awards among media agencies at the MENA Cristals in addition to being awarded the media agency and media network of the year. We are proud of achieving our objectives, for which the credit goes to our clients and team, who took on the challenge throughout the year of 2012 and developed many award-winning campaigns that were recognised by the jury.”

Another big winner was Leo Burnett Beirut, which was helped to agency of the year by Cafe Super Brasil’s ‘Read the country’s fortune’, which picked up a number of awards, including the grand Cristal in the integrated category and the advertisers’ grand Cristal.

Kamil Kuran, managing director for the Levant region at Leo Burnett, says: “As every year, it’s a great place to network and catch up with key figures in the industry, and the fact that it is held in Lebanon is a plus as it is the only awards show of its kind held there.”