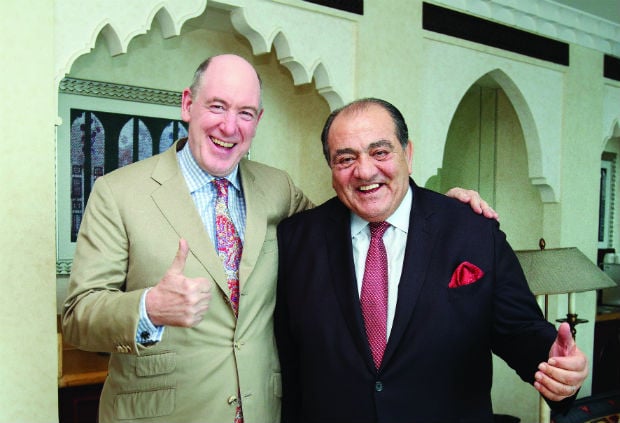 Last year was a stellar year for Memac Ogilvy, the regional arm of marcoms powerhouse Ogilvy & Mather. Perhaps no one is more viscerally aware of this than global Ogilvy chief Miles Young, who has since hiked up his firm’s 40 per cent share in Memac to 60 per cent.

This was also a historic day for Eddie Moutran, an unassuming Lebanese businessman who founded Memac in Bahrain from small beginnings in 1984.

On the day of the deal in March this year, the pair are sat side by
side on a sofa, equally pleased with themselves. While the ad men remain

tight-lipped on the exact sums behind the deal, this is a clearly a relationship that runs deep.

Moutran says: “It wasn’t until 1998 that we added Ogilvy to our name. We did that on purpose, because local pedigree and international reach is better. Ogilvy always says I am ‘the

After several decades as chief decision maker Moutran admits that some things are going to change around the office with the new deal.

“It’s no longer my decision about how we do things. I have partners that I love and respect and, of course, things will need to be cleared beforehand. I see more discipline; I see stricter attention to how we look after clients, especially international clients,” the Memac founder says.

“I will stay for as long as I’m useful. I will never allow anyone to ask ‘why’s he still here? What’s he doing?’ As long as I have the energy and the health and the ability to deliver, I’ll try to stay. If not, I’ll go home.”

At this point, a distinctly English and boldly dressed Young casts a sideways glance at Moutran.

Young says: “Let me add my own comment on that, we’ve talked about buying Memac as if it’s some kind of object but that’s not what it is. Memac is a living organism that’s been created by Eddie. He will continue for as long as he wants and I think that will be a long time. I’ve known him for a long time and I simply can’t imagine him working one day a week. It is not in the nature of the man.”

Hailed as a turnaround agent for Ogilvy, Young knows a good asset when he sees one. Having spent 13 years with Ogilvy in Asia, Young has
a predilection for understanding the growth power of emerging markets.

The CEO doubled Ogilvy Asia’s revenue to $500 million between 2003 and 2008 and built out operations in China, India, Vietnam, Indonesia, Korea, Japan, Thailand and Pakistan as he expanded practice disciplines.

Now in Ogilvy’s top seat, Young’s fast markets focus is helping drive the US agency out of a legacy of stiff complacency.

“The agency was largely run by Americans imbued with a kind of insular elitism reflecting one of the bluest of advertising’s blue-chip clubs,” opined respected US magazine AdWeek in March last year, “new business largely came by way of personal connections, with former CEOs… swooping into some far-flung office before moving on to the next dot on the map.”

The MENA region is one of the fastest growing advertising markets globally. While total MENA media ad spending in 2013 remained the lowest in the world at $18.3 billion, MENA is set to grow by seven per cent in 2014, compared to 2.6 per cent in the US for the same period. And this is a trend that is only set to continue as the overall population grows and disposable income increases.

In fact, not so long ago Young spotted a global underlying trend that’s driving this extreme regional advertising growth: the Halal economy.

So passionate was Young about the need to address the consumer needs of a growing and powerful international Muslim community that he founded the world’s first Islamic marketing consulting company, Ogilvy Noor.

“The idea was to try to use this to spark a debate and we’ve been successful to some extent, but I wouldn’t want to overclaim it. I think there’s still
a lot more to be done. Since we started it there has been an interesting shift… back in those days it was Malaysia and Brunei who were really making the running [for the Halal economy] and that’s now shifting. In Dubai now there is a much bigger opportunity to take the intellectual leadership. There’s the firepower and the muscle of a global hub to make it happen,” Young says.

“In our new relationship with Memac, we will be talking about how to exploit this growth. The reason it hasn’t been done before is because it’s viewed as legalistic and Halal is viewed as a labelling exercise. One of the bugbears of Islamic branding is that the quality of design for instance is very poor. The mind set is that all you need is a label of halal and that passes by the whole world of design, modern architecture, marketing and so on, it’s particularly design-deficient,” the CEO laments.

As Ogilvy channels its efforts into the region, with potential plans to expand into Libya, Sudan and Oman, Young says he will keep to the management style that has served him so well in emerging markets, and indeed the US, to date.

“Always listen to ‘the street’, do not only rely on what the people around you want you to hear,” Young warns. “And talent then helps, but it’s important not to show it too much.”