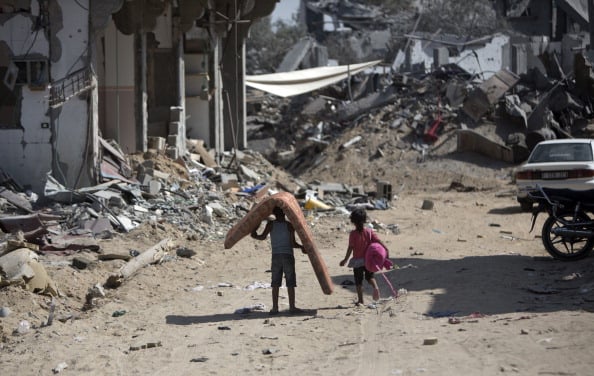 Mediators worked against the clock on Thursday to extend a Gaza truce between Israel and the Palestinians as the three-day ceasefire went into its final 24 hours.

Israel has said it is ready to agree to an extension as Egyptian mediators pursued talks with Israelis and Palestinians on an enduring end to a war that devastated the Hamas-ruled enclave, while Palestinians want an Israeli-Egyptian blockade of Gaza to be lifted and prisoners held by Israel to be freed.

“Indirect talks are ongoing and we still have today to secure this,” an Egyptian official said when asked whether the truce was likely to go beyond Friday.

“Egypt’s aims are to stabilise and extend the truce with the agreement of both sides and to begin negotiations towards a permanent agreement to cease fire and ease border restrictions.”

After a month of bitter fighting, the two sides are not meeting face to face.

Gaza officials say the war has killed 1,874 Palestinians, most of them civilians. Israel says 64 of its soldiers and three civilians have been killed since fighting began on July 8, after a surge in Palestinian rocket salvoes into Israel.

An Israeli official said late on Wednesday that Israel “has expressed its readiness to extend the truce under its current terms” beyond Friday morning’s deadline for the three-day deal that took effect on Tuesday and has so far held.

But a senior Hamas political leader based in Cairo, Moussa Abu Marzouk, said on Wednesday night that “there is no agreement” to prolong the ceasefire.

Hamas refusal to do so could further alienate Egypt, whose government has been hostile to the Islamist group and which ultimately controls Gaza’s main gateway to the world, the Rafah border crossing.

Earlier a senior official with the Islamist movement’s armed wing threatened to quit the talks without progress towards achieving its demands to lift a Gaza blockade and free prisoners held by Israel. Israel has resisted those demands.

Israel’s armed forces chief, Lieutenant-General Benny Gantz, said that should Hamas disrupt the ceasefire, Israel would use “whatever force necessary to ensure the security of Israeli citizens”.

It showed signs of expecting the truce to last by lifting official emergency restrictions on civilians living in Israel’s south near Gaza, permitting more public activities and urging everyone to resume their routines.

In Gaza, where some half-million people have been displaced by a month of bloodshed, some residents left U.N. shelters to return to neighbourhoods devastated by Israeli shelling.

President Barack Obama, backing efforts to broker a durable ceasefire, called for a longer-term solution that provides for Israeli security while offering Gaza residents hope they will not be permanently cut off from the world.

While condemning Hamas for launching rockets against Israel from population centres, Obama urged an eventual formula to ease hardships of ordinary Palestinians.

“Long term, there has to be a recognition that Gaza cannot sustain itself permanently closed off from the world and incapable of providing some opportunity – jobs, economic growth – for the population that lives there,” Obama said in Washington.

An Israeli official who declined to be identified said Israel wanted humanitarian aid to flow to Gaza’s 1.8 million inhabitants as soon as possible.

But, the official said, the import of cement – vital for reconstruction – would depend on achieving guarantees that it would not be used by militants to construct more infiltration tunnels leading into Israel and other fortifications.

Efforts to turn the ceasefire into a lasting truce could prove difficult, with the sides far apart on their central demands, and each rejecting the other’s legitimacy. Hamas rejects Israel’s existence and vows to destroy it, while Israel denounces Hamas as a terrorist group and eschews any contact.