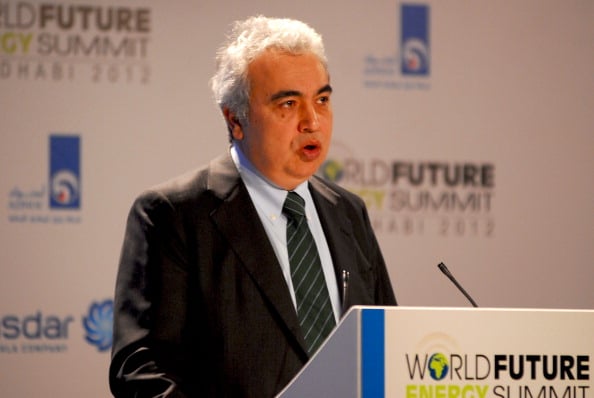 Countries in the Middle East need to urgently phase out fossil fuel subsidies if they intend to reach their renewable energy targets, a senior energy expert has warned.

The Middle East has some of the highest fuel subsidies in the world, said Fatih Birol, chief economist at the International Energy Agency (IEA).

“Worldwide, we have $500 billion fossil fuel subsidies and 50 per cent of that is in the Middle East,” he said on the sidelines of the World Future Energy Summit in Abu Dhabi.

“It is extremely challenging to have such big subsidies and achieve renewable energy targets.

“If you want renewable industry to grow and on the other hand, you have fossil fuel subsidies, they are not complementary,” he added.

Domestic consumption of fuel is growing very strongly in this region, because of population growth, but also because of the artificially low oil prices, said Birol.

“This has two implications­ – for one, it becomes difficult for developing countries to get oil imports, and two, the region is losing a lot of revenues which it could have got from exports.

“So countries in the region have to do two things, firstly, look at the alternatives to oil generation, especially solar and wind, which are crucial. And second, phase out the fossil fuel subsidies in order to bring the oil price down atleast in line with international markets.

“If this is not done, I think we may very well see very big challenges in the region,” he warned.

“It’s good for countries to have targets, but it’s important to put legs to targets so that they can run.”

If the region reduces subsidies and provides concrete financial and other support to the renewable energy sector, Birol estimates that the Middle East as a whole can produce 10 per cent of electricity from renewables by 2035.