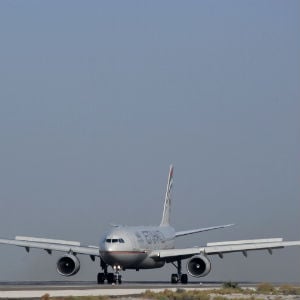 Middle East carriers are expected to post a net profit of $400 million this year, down from $1 billion in 2011, according to the latest forecast issued by the International Air Transport Association (IATA).

“The weakness of European originating traffic will damage long-haul markets,” said the report. But overall growth is expected, as regional carriers are estimated to expand capacity by 13.3 per cent, lower than the 14.1 per cent growth in demand, said IATA.

The IATA forecast also said that global industry profits are expected to reach $3 billion this year, down from $7.9 billion in 2011.

“A fall in oil prices, stronger than expected growth in passenger traffic and a bottoming out of the freight market are driving some improvements in the profitability outlook,” said the report.

“However, this is offset by the continued and deepening European sovereign debt crisis,” it added.

“The Eurozone crisis is standing in the way of improved profitability and we continue to face the prospect of a net profit margin of just 0.5 per cent,” said Tony Tyler, IATA’s director general and CEO.

The forecast uses an estimate of $110 per barrel for brent, but IATA said that fuel is still expected to account for 33 per cent of airline operating costs, the same as in 2008 when oil prices spiked.

“Limited capacity growth, high asset utilisation and lower oil prices will help to contain cost increases in 2012 to 7.3 per cent, down from a rise of 10.6 per cent in 2011,” said the report.

“But revenue growth is expected to slow more significantlyfrom 9.3 per cent last year to 5.7 per cent this year. In 2012, operating revenues are expected to reach $631 billion, while operating costs will grow to $623 billion,” it said.

“There has been no let-up in the volatility of the economic environment,” said Tyler.

“A few months ago, an oil price crisis was the biggest risk. Now all eyes are back on Europe.

“Markets are expecting the Eurozone sovereign debt crisis to intensify and economic damage to follow. But with little clarity on how European governments will manage the situation beyond providing further liquidity, the risk of a major downward shift in economic prospects is very real. The next months are critical and the implications are big,” he added.