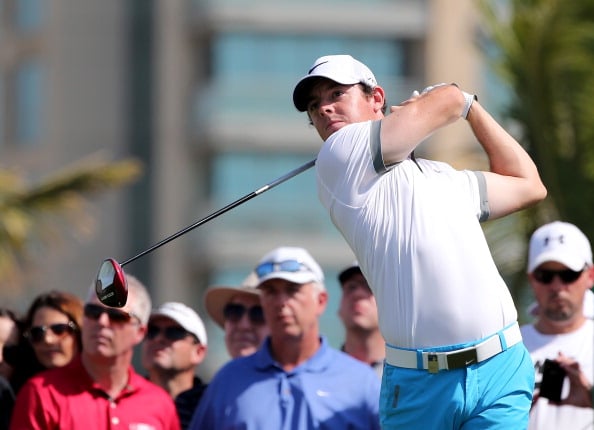 Rory McIlroy hit a sizzling nine-under 63 in the opening round of the $2.5 million Dubai Desert Classic on Thursday, bolstering his hopes of claiming a first European tour win since 2012.

Playing the back nine holes first, the Northern Irishman reached the turn at five-under after sinking a quintet of birdies from the 12th to the 18th.

He rattled in an eagle at the par-five third hole with a 25-foot putt and picked up two further shots in a blemish-free round on the Majlis course.

Playing partner Tiger Woods kept pace initially to be four-under after nine holes, but then sunk nine successive pars to finish on 68, five behind his rival.

“Sometimes you have an early start, it maybe takes you a few holes to get going,” McIlroy told reporters, when asked about his scintillating start.

“But whenever you have people on the tee box and cameras clicking, it sort of makes you more alert at that time of the morning when sometimes you’re half asleep.”

It could have been even better for the 24-year-old, who missed a six-foot putt on the opening hole and lipped out another birdie attempt on the fifth hole. Had those gone he could have equalled the course record of 61.

“I drove it well and I can really take advantage of hitting it long and straight here,” McIlroy added. “I got a lot of wedges into greens. If I can keep doing that, hopefully scores like this will become more regular.”

McIlroy has fond memories of Dubai, claiming his first European tour victory at this event in 2009 and also winning 2012’s DP World Tour Championship to become only the second golfer to top the money list in both Europe and United States in the same season.

These achievements helped McIlroy become world number one, but he endured a tough 2013, rarely troubling the leaderboard as he sunk to sixth in the rankings.

The twice major winner has begun to find his form again, winning the Australian Open in December and finishing joint-second at the Abu Dhabi HSBC Golf Championship earlier this month, with four top-10 finishes in his past five events on the European Tour.

“Getting back to world No. 1, it’s a by-product of playing well, giving yourself chances to win tournaments. If I finish second in every tournament from now to the end of the year, I would be world No. 1, I won’t be happy: I wouldn’t have won,” added McIlroy.

“These scores may look somewhat routine out there, but there’s a lot of hard work that goes on behind the scenes to actually be able to go out and shoot scores like this.”

World number one Woods said he was relieved to sink a birdie on his opening hole in Dubai, his first competitive golf since last week’s dire 79 at California’s Torrey Pines, the second-worst round of his professional career.

The 38-year-old found the sand with alarming regularity but was still able to pick up further shots at 13, 15 and 18.

He found it harder going as overcast skies gave way to piercing desert sunshine, missing a 10-foot birdie chance at the second in a barren last nine holes.

“The greens are perfect, absolutely perfect,” Woods told reporters. “They have softened them up so they are a little more receptive but they are still just as fast. I’m sure the guys in the afternoon probably won’t go as low. They were drying out as we were playing.”