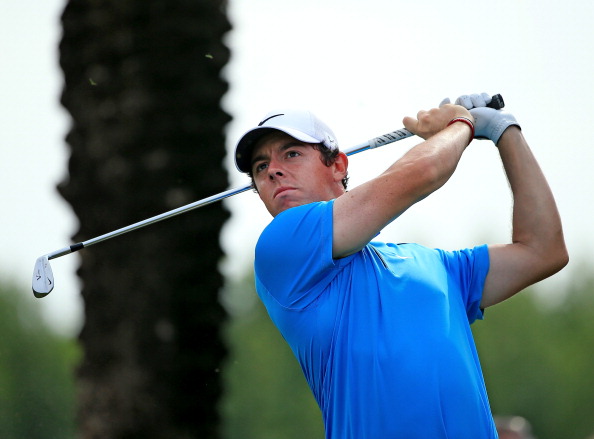 McIlroy reached the halfway stage 11 under at 133 having done most of the hard work with a first-round 63.

He is one shot ahead of the United States’ Brooks Koepka, who followed his opening 69 with a 65.

“Hopefully that’s my bad round out of the way and I can shoot a couple of better ones over the weekend,” McIlroy told reporters.

“It looked for a while like I could build a three-four shot lead.

“The wind was up and I didn’t feel as comfortable as I did yesterday. The wind is supposed to get up in the next couple of days as well – I don’t mind because I feel I’m hitting the ball well enough and wind usually makes it a bit more of a ball striking contest.”

Scoring on Friday proved tougher for most players as Thursday’s lush greens dried out under the unforgiving Gulf sun.

Woods was among those to suffer, the 14-times major winner finding the fairway on only four occasions.

He also failed to snaffle the trickier birdie opportunities that would have been routine putts in his pomp as he carded a one-over 73.

The 38-year-old will start Saturday’s third round on 141, eight adrift of McIlroy, and last week’s disastrous 79 at California’s Torrey Pines – the second worst round of Woods’ career – still seems to be troubling him.

“I hit the ball pretty good on the (Torrey Pines) South course on the first day, but on the North course I really struggled and I haven’t hit the ball the way I wanted to this week either.

“The (Dubai) pins were all accessible. These are not brutal pins. If you’re able to get the ball on the fairway you can be aggressive.”

McIlroy cut the happier figure on course, repeatedly chatting with his fiancée, Danish tennis player Caroline Wozniacki, as she followed his progress around the Majlis course.

Having reached world number one, McIlroy endured a barren 2013 on the European Tour and is now sixth in the rankings, his last tour victory the 2012 DP World Tour Championship, also in Dubai.

But with four top-10 finishes in his past five tour events, the big-hitting Manchester United fan is finding his form once more and will be favourite to win again in Dubai, especially as Sweden’s Henrik Stenson is the only top-20 player within seven shots of him. Europe’s 2013 money list winner Stenson is four shots adrift at 137.

Yet McIlroy began Friday inauspiciously, pulling his opening drive into the rough and then fluffing a 12-feet par putt for his first bogey of the tournament.

The 24-year-old’s tee shots were also wayward on the next two holes, but a sumptuous bunker shot allowed him to sink a three-foot birdie putt at the third.

McIlroy picked up another shot on the fifth as he made his first fairway of the round and reasserted his grip on the tournament with a five-foot birdie at the seventh and another at the 10th.

Two bogeys at 13 and 16 threatened to pull the former U.S. Open champion back into the pack, but a birdie on the last gave him more comfort going into the third round.