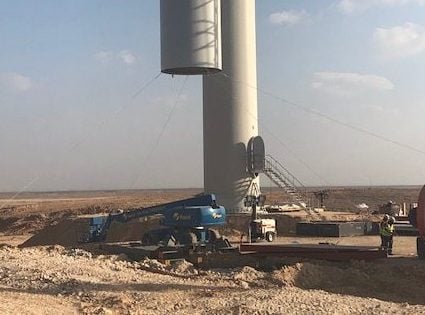 Abu Dhabi-bases Masdar has announced the installation of the first turbine at the 50 megawatt Dhofar Wind Farm, according the UAE state media agency, WAM.

Located in the Dhofar governorate in south Oman, the 13-turbine project is set to be the Gulf region’s first large-scale commercial wind farm. It is being developed by a Masdar-led consortium including GE and Spain’s TSK, with funding coming from the Abu Dhabi Fund for Development, added WAM.

The project came into existence following a 2014 agreement between Masdar and the Rural Areas Electricity Company of Oman, Tanweer. All 13 turbines are scheduled to be installed by March, whereupon the wind farm will be handed over to Tanweer which will operate the plant and supply the generated electricity to the local Dhofar power grid.

Saleh bin Nasser Al Rumhi, chief executive officer of Tanweer, said: “We are looking forward to the implementation of this initiative, which will be the first large-scale renewables project in Oman.

“Our team has worked closely with all the participants to bring this technology to the Sultanate and to ensure knowledge transfer in the country. Tanweer’s mandate is to supply electricity to large areas of Oman, and this project fits well with our expertise and ambition.”

The project’s 3.8MW wind turbines are being provided by GE, while TSK is responsible for the rest of the wind farm’s infrastructure, including medium and high-voltage substations and 13km of overhead transmission lines.

“The company [Tanweer] is licensed to generate, transmit, distribute, and supply electricity in the concession areas,” added Al Rumhi.

“Our customers include cities, villages, and local communities scattered across almost 75 per cent of the land area of the Sultanate. We are also looking to implement other renewable technologies, including solar PV, to augment our existing generation plants across 11 site locations.”

Expected to be operational by the third quarter of 2019, the Dhofar Wind Farm will supply 7 per cent of the governorate’s electricity demand – enough clean energy to power around 16,000 homes, while offsetting an estimated 110,000 tonnes of carbon dioxide emissions per year.

“ADFD is proud to work alongside its national and international partners and bring the Gulf’s largest wind farm to Oman. Not only will the electricity generated by the Dhofar project help in supporting Oman’s growing energy demand and economic growth, it is also expected to help reduce domestic reliance on gas for electricity generation.

“This supply can soon be redirected towards more valuable industrial uses and to preserve natural gas resources.”

Mohamed Jameel Al Ramahi, CEO of Masdar, added: “As a global leader in wind energy technology, we are proud to support the Sultanate of Oman in the realisation of its renewable energy ambitions, and deeply committed to our partnership with Abu Dhabi Fund for Development and the world-class consortium delivering this milestone wind energy project on schedule and to the highest operational standard.”