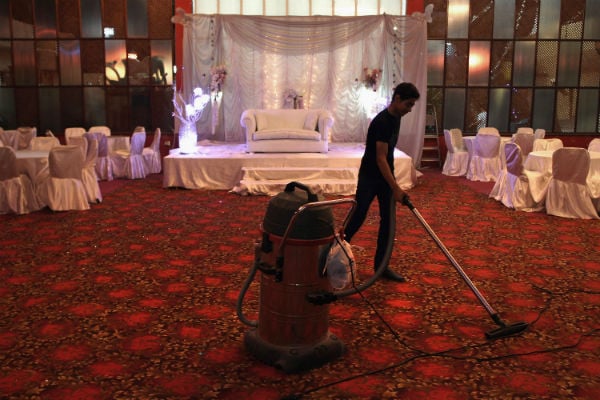 In a luxury hotel suite, away from prying eyes, twenty Kuwaiti female guests at a traditional wedding party segregated by the sexes watch the men via a video link.

The women snap pictures of the festivities on their cell phones and swap stories about how they met their husbands and their views on marriage. The contrasts between young and old in the conversation expose a shift in society that has the government worried.

“The most important thing now is getting a university degree,” said Noora al-Jaber, 28, who married seven years ago.

“The woman should get a good certificate and the man a steady income. Only then can they think about marriage,” she said, as the women sipped fruit juice from champagne flutes.

The role of the family is extremely important in Kuwait, where large clans forge blood ties that are essential not only socially but also in politics and business.

But the marriage rate is falling: in 2011 there were 359 marriages per 100,000 inhabitants, a ten per cent decrease compared to 2007, according to figures from the Ministry of Justice. Around 70 per cent of the marriages were between two nationals of the Gulf Arab state, which is home to 1.2 million Kuwaitis and 2.4 million foreigners.

The government, which sees itself as the guardian of traditional values and social stability, has shown its concern about the trend with a campaign called “Marriage Comes First.”

The campaign, launched in March by the Justice Ministry, encourages Kuwaitis to think about matrimony before material goods, studying, a career, travelling and having fun with friends.

“You are right” to want all these things, say the brightly coloured advertisements in local media. “But, MARRIAGE COMES FIRST.”

Ministry officials declined to comment on the campaign. But the issue has potentially vast implications for the tiny oil producer, including its effect on the birth rate and the role of women and the family in what is still a deeply conservative society.

The trend in the fertility rate has remained largely stable since 2005, although it is down to 2.3 births per woman in 2010 compared to 3.5 in 1990, according to data compiled by the World Health Organisation.

But this could change, reflecting a trend across the region, said Mona Almunajjed, a Saudi sociologist who has written about social demographics in the Middle East.

“In the long term it is very important because it is going to affect the demographic curve. If women are becoming more financially independent, and marrying later, they are going to have fewer children,” she said.

A slower birth rate is not always a negative in countries where the young make up a large proportion of the “age pyramid”, such as in the Gulf, said Leila Hoteit, a management consultant at Booz & Company in Abu Dhabi.

“Given the large challenge they face to employ their youth, a drop in birth rate is not necessarily a bad thing for society,” she told Reuters in an e-mail.

“The concern I would say is more around social factors: the social cohesion of families.”

Although Kuwaitis live in a far more open social environment than their counterparts in neighbouring Saudi Arabia, relationships before marriage are largely taboo and people are encouraged to marry early, usually in unions arranged according to family ties and social status.

Polygamous marriages are not uncommon in Islamic societies but only small numbers of Kuwaiti men have more than one wife. Traditionally, up to a third of marriages have ended in divorce and that figure has been rising in recent years.

At the ladies’ gathering, accessed by an elevator shielded by a wooden screen to allow the women to enter and leave unseen, 22-year-old Nour al-Rujaib said the pressure for women to marry starts from around the age of 21.

“Girls want to get married so they can have freedom. We cannot travel alone,” she said, dressed in a red cocktail dress and black high heels.

She said she was happy to marry early if the man could afford for her to have a comfortable lifestyle.

The number of men getting married later than age 24 grew to 65 per cent in 2008 from 61 per cent in 2000, according to a calculation based on statistics compiled by the United Nations.

For women, the number rose only slightly over the same period, from 38 per cent to 40 per cent.

Some urban Kuwaitis say that attempts to encourage early, traditional marriages belong in the past.

“Society is much more open than when I was a teenager. You can socialize through the Internet, go travelling more easily,” said 34-year-old Taiba al-Jaber, who caused uproar in her family by insisting on marrying a man she had picked herself.

“I was Americanized. After the Iraqi invasion, our society felt the American influence when the American troops came here. We saw movies and soap operas. But back then I guess I was already too open for my community,” she said.

Her husband, a Saudi national who works in information technology, finally convinced her father he was a worthy partner after compiling a power point presentation on his family heritage and income. They married in 2007, some seven years after he first proposed.

“Some of my friends just don’t want to get married. It has become far too expensive,” he told Reuters outside the doors of the male wedding party.

“We live in a society where the man bears the costs for almost everything – the house, food, clothes, children, a maid, cars, shopping,” he said, counting off the list on his fingers.

Inside the hotel ballroom, men danced with swords to the beat of traditional drums. The air was heavy with the scent of bakhoor, special incense worth more than its weight in gold.

Some men do not want to be tied down, said his friend Abdulmohsen al-Barjas, also 29, though he scoffed at that concern.

“I think this idea is just propaganda. I am married and I am free. Us two, we went to Dubai recently, we get to travel.”

Many Kuwaitis still opt for a “traditional” arranged marriage, with a courting period ranging from one week to several months, mainly in the presence of family members.

The groom usually pays a cash dowry to the bride’s family to marry – sometimes amounting to tens of thousands of dollars.

Compounding the marriage problem from the government’s perspective is a rising divorce rate.

The number of divorces rose 16 per cent in the five years to 2011 to 172 divorces for every 100,000 inhabitants, according to Justice Ministry statistics. Kuwait had the highest total divorce rate among Gulf Cooperation Council countries, according to a 2010 report by Booz & Company.

Kuwaitis say divorce and remarriage have become easier and carry less of a social stigma. Nearly a quarter of those who divorced in 2011 had been married for less than a year.

Health Ministry officials told Reuters they were considering setting up pre-marriage counselling clinics to prepare Kuwaitis for matrimony, rather than just testing them for hereditary and infectious diseases as at present.

“What we need is a special centre outside the court for couples to talk over their problems, but this is difficult in our society, people go to their families instead,” lawyer Waleed al-Dousari said.

He sees himself as part lawyer, part counsellor, and handles 5-6 new divorce cases a month. When he started out six years ago, the number was half that, he said.

Dousari said it is important to prevent divorce because the close-knit nature of Kuwait makes separation an especially disruptive force that pits whole families against each other.

“In our society, the problems that come after the divorce can be even worse,” he said.