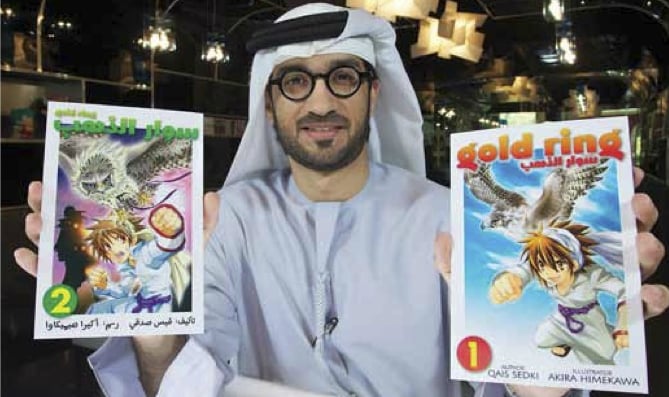 It may not be obvious but Japanese culture has been steadily seeping into the Emirates’ veins. The Japanese Culture Day celebration at Safa Park this year was a good example. The event covered everything from the ceremonial tea ceremony, Minyo – traditional Japanese dance form, Ikebana – the Japanese art of flower arrangement and Origami paper craft to vintage kimonos as well as kimono and obi wearing demos, and Japanese cuisine. Organised by Versus – on – and offline platform for presenting and collecting art – along with the Japanese Consulate in Dubai, the event shows growing interest in the traditions and culture of the Land of the Rising Sun.

THE POWER OF MANGA

Another Emirati successfully drawing upon Japanese cultural and artistic influences is Qais Sedki, head of Pageflip, a Dubai-based manga publishing house. The company’s Gold Ring manga, authored by Sedki and drawn by two Japanese manga artists, is the UAE’s first original Arabic–language manga. In 2010, it won the UAE’s Sheikh Zayed Book Award for Children’s Literature. “It’s good to have our own manga, and it’s important that people read it in Arabic, because that’s this country’s main language,” says Sedki.

To a large extent, Manga has been responsible for piquing UAE’s interest in Japanese culture. Echoing this sentiment is Emirati Khaled Bin Hamad, author of sci-fi graphic novel Nasser’s Secrets that blends Japanese styles with Emirati culture. Bin Hamad’s novel debuted at the Middle East Film and Comic Con (MEFCC) where introductory pages of the comic were displayed on large canvases. His concept of presenting a novel as an art exhibition is said to have originated in Japan, and was the first of its kind in the Middle East. From a young age Bin Hamad developed a passion for Japanese anime and manga.

It was during a two-year stay in Japan while studying for his Master’s degree that his love for these Japanese staples was reignited. Bin Hamad was captivated by the Japanese artists Hayao Miyazaki and Takehiko Inoue and aims to complete the full comic, with an Arabic translation, in time for the next MEFCC in April.

Manga isn’t just inspiring UAE’s writers but has crossed-over into the UAE’s food scene too. Owner of restaurant Manga Sushi, a Dubai-based manga-themed restaurant, Sultan Al Banna, claims to “love Japan more than anyone in the world”. Manga Sushi is much adored among the local populace not just for the food but the ambience too. Drawings and figurines of popular manga characters decorate the walls.There is also a collection of manga books and the sushi menu also contains plenty of surprises: dishes named Godzilla, otaku, yakuza and dragon ball. Al Banna’s first encounter with Japan came through manga. He fell in love with the comics as a 12 year–old, and has been hooked ever since. Doraemon, Captain Tsubasa, Ikky-san, Little Heidi, The Rose of Versailles, Slump and Arale – from the latest hits to the classics, he knows them all. Sultan’s interest in manga has inspired him to start his journey towards understanding more profound aspects of the traditional culture.

It is noteworthy that this cultural exchange isn’t one way only. The Middle East is also leaving a mark on the imaginations of manga artists with many using the ‘mystique’ of the region in their works. Arab influences in character development are being more and more used. For example, the manga El Hazard seems to have heavy Arab influences in a fantasy setting, and many of the character names are inspired from the Arab world.

However, Japan’s contribution to the UAE’s art scene isn’t limited to manga alone. Last year the solo show by legendary Japanese artist Yayoi Kusama was one of the high points of the prestigious Art Dubai fair. Elsewhere, Yasuaki Onishi’s genius was employed for the opening of The Mine gallery. Onishi Onishi worked for more than six days to install Vertical Emptiness, a plastic sheet hung by wire in an undulating cloud-like pattern and decorated with wispy strands of dried glue to encase the viewer in a fragile, tent–like enclosure. Influential anime–inspired artist Takashi Murakami made his Middle East debut at the Qatar Museums Authority’s cavernous Al Riwaq space.

Art has become the new Silk Route between the UAE and Japan and vice– versa.

What is manga?
Often referred to in english as ‘comic books’, Japanese manga is a very diverse art form. The story lines are not limited to humour and cover every conceivable aspect of life. Mangas are available in different genres as well as age groups.