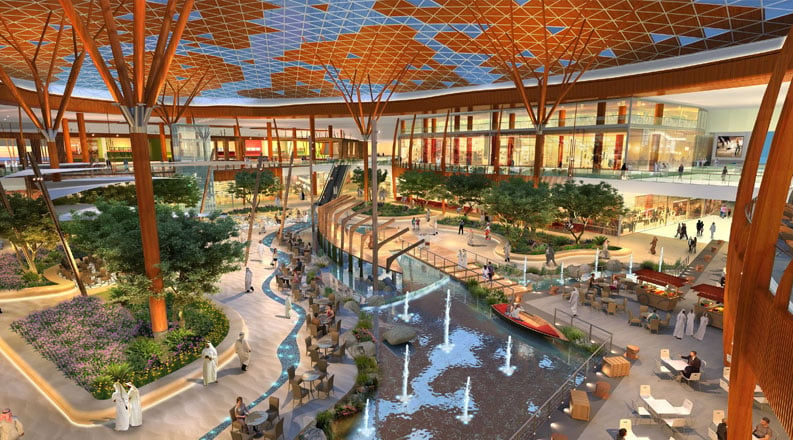 Could Doha ever outdo Dubai in the retail stakes? It’s a question few would have bothered to ask five years ago, such was the gulf between the two cities. However, with the emergence of the Mall of Qatar – an $820 million venture expected in 2015 – and a series of mega-projects planned, as well as the World Cup, some are beginning to wonder.

The respective retail landscapes are vastly different, most significantly because of Dubai’s major head start. Dubai Mall, for instance, which opened in 2008 with 635 retailers, now has over 1,200 shops. When the Mall of Qatar opens its doors it will have around 400. But there are interesting dynamics between the two cities to explore.

Due to barriers to entry like in Dubai, foreign brands have to engage in a joint venture with local and regional partners to enter the retail sector. But the malls in Qatar currently have only a limited number of international brands compared to Dubai, which is still the regional benchmark in the retail space. Qatar’s brands tend to have multiple outlets and cater to the mid-to-high end income segments.

Brand penetration in Doha is not as high as regional benchmarks too. This is because the domestic market has yet to reach maturity, both from a shoppers’ perspective and on the product supply side.

The planned Mall of Qatar hopes to change all this. Located in the Al Rayyan district, 75 per cent of Qatar’s two million population is within a 25-minute drive. There will also be a metro station connected to the shopping mall, which itself is next door to one of the planned FIFA World Cup 2022 stadiums, close to Education City and next to an affluent residential community. Promoters expect to welcome some 20 million visitors to the shopping mall in its first year.

So, can Mall of Qatar and Dubai Mall be classed as regional rivals?

The question is complicated because while managers of the Mall of Qatar have publicly acknowledged Dubai Mall as the gold standard to emulate – for everything from interior finishes to tenant management – the two will face in slightly different directions.

“It is inaccurate to view these two super regional malls as competitors as they target significantly different geographic trade areas,” says Phil McArthur, founder and managing director of McArthur + Company, the firm selected to provide retail and leasing management services to Mall of Qatar.

“Dubai Mall has been recognised globally as one of the finest examples of master planning, strategic development and a wonderful collection of the world’s greatest brands.”

“Mall of Qatar will be the ‘nation’s mall’. It will feature over 450 leading retailers, restaurateurs and service providers. Mall of Qatar is the largest super regional shopping centre development in Qatar today with the construction programme on target to open in September of 2015.”

There is still a question mark over whether its appearance will be a game-changer. Many believe Mall of Qatar will struggle to replicate the international brand that Dubai has constructed and so may just rely on its appeal to a more regional set of consumers.

Others, like Trevor McFarlane, research director for the Middle East and Africa at Gulfstat, say with Dubai’s impeccable tourism and hospitality credentials it will continue to boast a distinct advantage.

“Mall of Qatar is certainly an interesting development for retail in Doha, and one that will add to the attractiveness of Doha as a shopping destination, but it will not be a game- changer for competition with Dubai.

“We have to remember that while Doha is adding retail capacity, so, too, is Dubai, and the UAE emirate enjoys first mover advantage in the shopping destination space. Most importantly, however, Dubai is a genuine tourist destination, while Doha is not – attracting mostly businessmen.”

At the last count, Dubai tourism had registered a strong 2013, with the greatest strength coming from the variety of source countries, which range from Saudi Arabia and Russia to China and the UK.

The latest visitor number results, released by Dubai’s Department of Tourism and Commerce Marketing, revealed increases across hotel guests, room occupancy levels, hotel and hotel apartment revenues and average length of stay, all key factors for Dubai to achieve its Tourism Vision for 2020.

During the first nine months of the year, guest numbers across all hotels and hotel apartments reached 7,941,118, a 9.8 per cent increase year-on-year.

Of these, visitors from Saudi made up the largest chunk, with more than one million visiting Dubai in the first nine months of the year. They were followed by tourists from India, a source market for more than 630,000 visitors to Dubai during the period. Visitors from Britain (535,000), from the US (357,000) and Russia (264,000) made up the remaining of the top five source markets for Dubai hotels.

It’s news of the high level of Saudi visitors that Doha officials will find particularly interesting. This is likely to be the battlefield in future between Dubai and Doha, and where many believe Qatar could carve out an opportunity.

“One advantage Doha has over Dubai is its proximity to Saudi, where pious Saudis might be attracted to Doha rather than freewheeling Dubai,” says McFarlane.

It is likely that given that Doha is undersupplied when it comes to modern shopping centre space, there will be a chance over the next five to seven years to attract consumers from neighbouring Saudi or Bahrain as mega malls spring up.

But there will be some work to do to ensure the infrastructure supporting this retail expansion is robust.

This $15 billion new airport plans to cater for about 28 million passengers, compared with the 21 million that travelled through Doha International in 2012. It is supposed to open with a public mosque, a health spa and two luxurious hotels, both believed to be 5-star.

However series of delays have crippled confidence. After a several-year delay, the big launch was pencilled in for April 2013, only to be cancelled at the last minute.

Now, the new airport is not expected to open until early 2014. Apart from the massive blow to Qatar Airways, the debacle could have huge implications for Doha’s retail prospects.

By comparison, Dubai is sitting pretty. Kristian Coates Ulrichsen, from the Baker Institute Fellow for Kuwait, says: “Infrastructure in Doha is under great and increasing strain and the difficulties surrounding the new airport are emblematic of the struggle the city has in relation to Dubai, whose infrastructure is at the moment far superior to that of Doha’s.

“Neither city has shown much regard for realism in retail projects, but Dubai has at least positioned itself as a mass market for international tourism in a way that Doha has not yet done.”

Ulrichsen adds: “Doha is trying to build a reputation for connectivity through Qatar Airways and the new global aviation hub at the Hamad International Airport, but much of this is directed at transit traffic rather than pitching Qatar as a destination in itself.”

Without a retail sector tied tightly to a booming tourism industry, Doha stands no chance, even though Qataris are wealthier than most, says David Macadam, CEO and vice chairman of the Middle East Council of Shopping Centres.

“Doha enjoys some of the highest GDP per person globally at approximately $95,000 but Dubai enjoys a very high level of tourism traffic which is facilitated by the airport, Emirates Airlines, and the great infrastructure in Dubai. The growth in number of tourists to 20 million by 2020 is indicative of the growth of tourism in Dubai and the UAE.”

In the UAE, the development of rentable retail space skyrocketed by 185 per cent from 2005 to 2010, largely driven by Dubai. But, according to Arabia Monitor, a research firm, over the next few years, the rate of growth is expected to taper off to 75 per cent from 2010 to 2015. Meanwhile, risks of over-heating and saturation should shift the emphasis towards Abu Dhabi.

In 2011, Dubai had 68 malls, more than four times the number in 2000. For sheer scale, Doha will find it almost impossible to compete like-for-like with Dubai. But officials in Qatar seem keen to avoid the excesses of what they see as Dubai’s attraction of the ‘mass market’ and would rather appeal to the luxury tourism and travel market instead.

For Doha to punch above its weight, Saudi spenders as well as a reliable infrastructure could sway the balance in the coming decades.