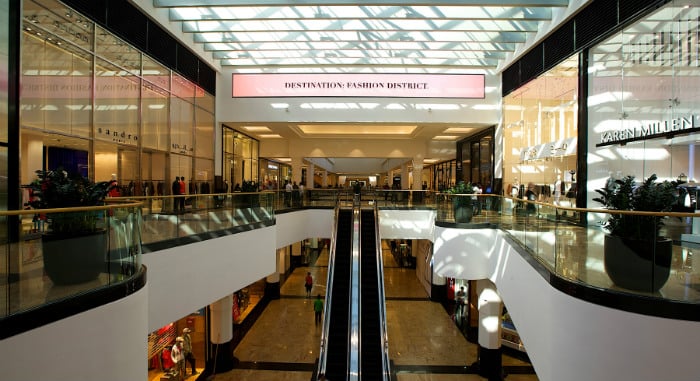 The new section is the first phase of the mall’s Dhs1 billion redevelopment programme, which is set for completion next year.

The fashion district, spread across 5,000 sqm, will include 30 new stores, and introduce a number of debutant stand-alone boutiques into the UAE including American luxury label Halston Heritage, McQ by Alexander McQueen, Sandro, Elie Tahari, Alice & Olivia and C Wonder.

In total, one quarter of the new section will be dedicated to first-time brands.

(Pictures of the launch)

“The redevelopment is Mall of the Emirates’ most aspirational project to-date.”

The second phase of the redevelopment programme includes a 25,000 sq m expansion, and will be situated above the existing Carrefour store.

“We are adding a new second level which will comprise a very large VOX cinema complex, a substantial food and beverage offering and a lifestyle centre,” Vazelakis explained to Gulf Business.

“The configuration is that it will run from the Central Galleria to the end of the mall.”

The second phase is slated for completion early next year, he confirmed.

“This project is very much a series of phases. The way we are doing it is that we complete one phase and it provides the opportunity for another phase. Now that this district is open, hoardings have gone up in the Galleria.

“By the end of phase two, once we move the existing cinemas, we will again create space for new tenants.

“Along with retail, we are potentially looking at a new component – a new luxury hotel, which will have a completely different offering,” he revealed.

The mall already has two hotels neighbouring it, including the Sheraton and Kempinski.

The final phase of the redevelopment will be completed by the end of 2015 or early 2016, said Vazelakis. By then, 25 per cent of the mall’s retail mix will be completely new for shoppers.

“We are hoping that the entire redevelopment will help increase footfall by around 10 per cent,” he said.

“That number could increase to 15 per cent after a couple of years,” he added.

The mall receives close to 40 million visitors per year at present, with tourists accounting for over 20 per cent of the numbers.

“I suspect with new and increased tourism in Dubai, that number will increase as well. But it’s a gradual thing, not an immediate bump,” Vazelakis said.