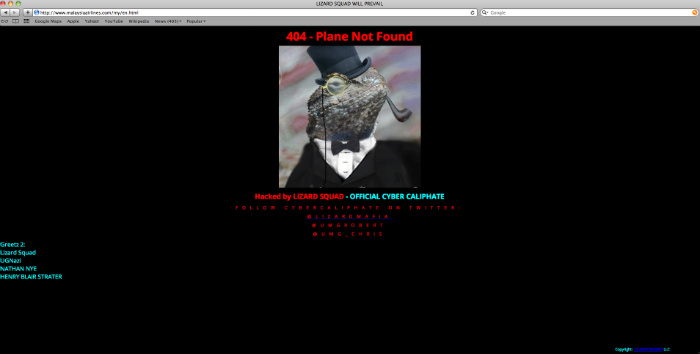 A group calling itself “Official Cyber Caliphate” said it hacked on Monday the official website of national carrier Malaysia Airlines (MAS), but the airline said its data servers remained intact and passenger bookings were not affected.

The website, www.malaysiaairlines.com, showed a photograph of a lizard in a top hat, monocle and tuxedo, surrounded by the messages ‘404 – Plane Not Found’ and ‘Hacked by Lizard Squad – Official Cyber Caliphate’. A rap song could be heard.

In a statement, MAS said the website was not hacked, but that users were redirected to a hacker website. It said the official site would be back up within 22 hours.

“Malaysia Airlines assures customers and clients that its website was not hacked and this temporary glitch does not affect their bookings and that user data remains secured,” it said.

Some media reports said the hacked website had earlier carried the words “ISIS will prevail” but the slogan could no longer be seen. ISIS is the acronym of the militant Islamic State group that has proclaimed a caliphate after seizing territory in Iraq and Syria.