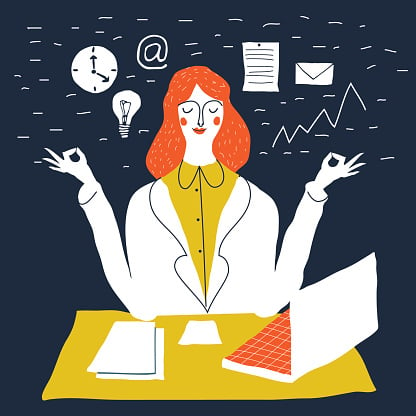 Doesn’t it feel great to jump between tasks, juggling them in the air and making rapid-fire managerial decisions? There’s a real sense of exhilaration. Multi-tasking is an executive elixir, a restorative pick-me-up to demonstrate your skills as a leader and go-getter.

Admittedly going from one task to the next makes us feel good, firing off dopamine – the pleasure chemical in the brain, as we spontaneously switch tasks in a pseudo-gamified hyper-connected digital environment. Whether that’s surfing screens, messages, online documents or smartphones. However multi-tasking doesn’t make us more productive. It’s quite the opposite.

Flummoxed, the researchers tested to establish whether high multitaskers were better at switching between tasks – they weren’t.

“They couldn’t help thinking about the task they weren’t doing,” Ophir said. “They can’t keep things separate in their minds.”

Elsewhere Stanford neuroscientist, Russ Poldrack found that when we try and learn information as we multitask, we send the information to the wrong part of the brain. For example, if you are taking up professional education and learning new information while watching television, the information will end up in the striatum, which stores new procedures and skills, as opposed to facts and ideas.

If you’d been paying full attention, the information would have been encoded in the hippocampus, where it’s organised and categorised, making it simpler for your brain to recover later.

When we leap from one task to another, there is also a metabolic cost, in that our brain burns through oxygenated glucose, the very fuel we require to help us stay focused. It’s no surprise then that we end up feeling drained and confused, as we’re running down the nutrients in our brain.

In contrast, the research suggests that single tasking is more effective. It also makes us more compassionate, considerate and happy. Yet how practical is it when you have multiple commitments and projects to deliver? Here are a couple of things you can do to practice single-tasking.

Try the Pomodoro technique, where you bring your full attention to one task for 25 minutes, after which you can take a five-minute break. Repeat the sequence three more times, then take a longer 15-minute break. This will really help you to focus and go deep fast. I regularly use it myself.

The next time you are on a dreaded conference call with a huge group, bring as much attention as possible to the call. Don’t check your messages or surf around the internet. Every time you feel an itch to wander, recall your attention back to the call. If your mind keeps wandering, then question whether you need to be on the call at all. Practice active listening. I know this should be obvious, but the number of times we sit with someone and we aren’t fully present is astonishing. Don’t be that person. Honestly listen and consider what the other is saying, without trying to interject. And definitely put your phone on airplane mode so you concentrate on the conversation. It also demonstrates you respect the other person’s time and they’ll reciprocate.

Rather than pretending to be on top of tasks through the illusory notion of busyness, why not tackle one task at a time. You’ll find yourself more effective and save yourself a whole deal of brain power.