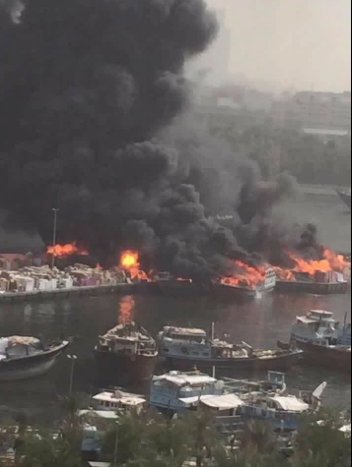 No serious injuries were reported, according to local media. But an official statement by Dubai Civil Defence confirmed that one worker was treated for first-degree burns and smoke inhalation at Rashid Hospital.

The blaze was reportedly doused after eight special teams battled for three hours, officials added. The fire, which began on one of the three boats, spread as a result of inflammable items such as plasticware, refrigerators and electronic items on the wharf, local media reported.

Dubai Police said it is carrying out an investigation to understand the cause of the fire.

Dubai Civil Defence officials said they received information about the fire at 3.04pm after which they dispatched teams to the site.

Photographs on social media sites showed huge flames and thick smoke engulfing the boats. However officials said that traffic on Dubai Creek was not affected as a result of the blaze.