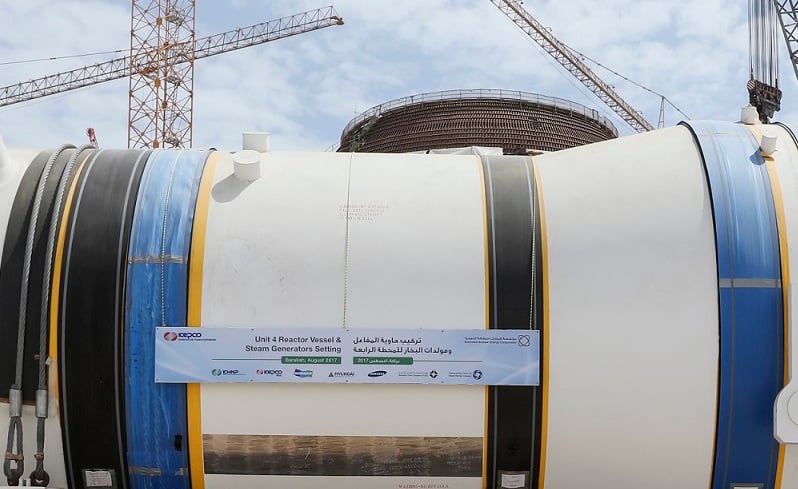 The Emirates Nuclear Energy Corporation (ENEC) has installed the steam generators and the reactor vessel (RV) at Unit 4 of the Barakah nuclear power plant in Abu Dhabi, it announced on Monday.

The RV is one of the most important and largest components in a nuclear energy plant. Weighing over 500 tonnes and measuring almost 15 metres in height, the RV will eventually contain the controlled nuclear reaction that will generate electricity. It is also one of the many defence-in-depth barriers that ensure the safety of nuclear energy plants.

Meanwhile steam generators, which are similar in length to a tennis court, also play a key role in converting the energy generated by the nuclear fission reaction in the RV into electricity. The heat generated in the RV is transferred to the steam generator, which turns water into steam and which in turn is then used to spin a turbine and generate electricity.

“The installation of the final reactor vessel and steam generators, as per the 2009 prime contract, is a great achievement.”

In May, ENEC announced that the launch of its first nuclear reactor would be delayed since it hadn’t receives regulatory approval.

The move will ensure “sufficient time for international assessments and adherence to nuclear industry safety standards, as well as a reinforcement of operational proficiency for plant personnel,” the company said at the time.

In its statement on Monday, ENEC confirmed that work on the project was “progressing steadily” with construction of the four units now more than 82 per cent complete.

All four units will deliver nuclear energy to the UAE grid, pending regulatory reviews and licencing. When the four reactors are completed, the plant is expected to deliver up to 25 per cent of the UAE’s electricity needs from nuclear energy and save up to 21 million tonnes of carbon emissions each year.

“It will also support in securing the energy sector by diversifying energy sources to meet the rapid growth of the national economy.”