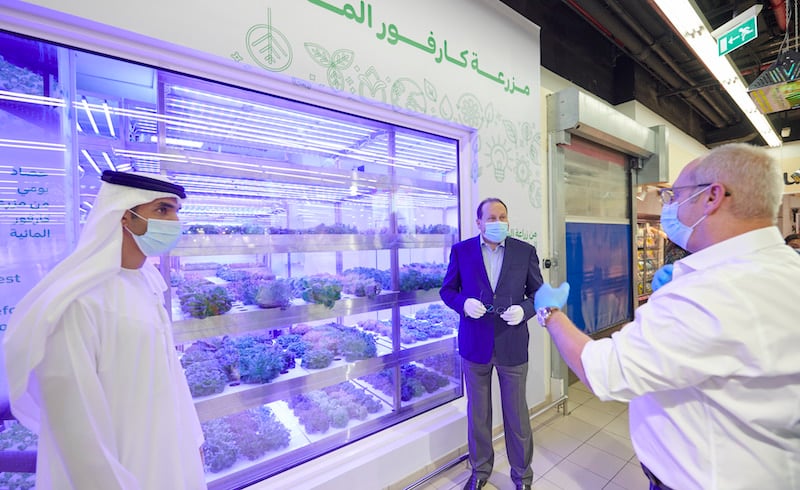 The farm spans 24 square metres and can accommodate up to 16 varieties of leafy greens, including lettuce, arugula, and kale, and herbs such as basil, dill, and sorrel.

The farms are part of an agreement signed by Majid Al Futtaim with the UAE’s Ministry of Climate Change and Environment to promote sustainable locally-grown produce, a statement said.

Hydroponics enables fresh produce to grow in a controlled environment, providing a steady supply of food throughout the year.

The farm also uses 90 per cent less water and less space than traditional farms to deliver approximately 10kg of fresh herbs and microgreens per day, equivalent to the yield of about 1 acre of farmland.

Alain Bejjani, CEO at Majid Al Futtaim Holding, said: “The increased supply of locally-grown produce is key to ensuring long-term food security in the UAE. With the introduction of our latest in-store hydroponics farm, we are expanding our own sustainable farming capabilities. At the same time, we are working closely with local farmers to stock their produce in our stores.”

The farm also contributes to Majid Al Futtaim’s commitment to offset the company’s water and carbon footprint by 2040.

The conglomerate has been stepping up its sustainability agenda, and late last year announced that it will eliminate single-use plastic from its operations by 2025.

As part of the decision, Carrefour stores will remove 800 million plastic grocery bags from circulation annually, it stated.