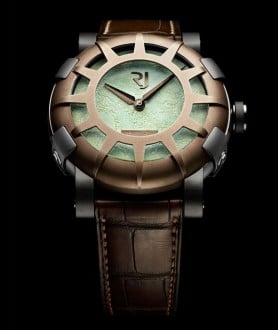 The art and luxury markets have historically been resilient to downturns as they are considered safe assets. However, today, even key high-end players are feeling the pinch.

A case in point is The Federation of the Swiss Watch Industry that showed losses for the first time in 20 months this September, while results from high-end luxury brands like Burberry – the British luxury goods company – were not as good as anticipated.

“The luxury industry will not see much growth,” confirmed Manuel Emch, CEO of Swiss luxury watchmaker Romain Jerome. “The tussle will be between stability and a downturn.“

Emch’s prior stint with Swatch took the company from a turnover of CHF 200,000 annually to CHF 35 million in ten years. That same sensibility has crossed over to Romain Jerome where the company has seen constant growth over the last eight years. Yet, he’s bearish for the near future.

“For 2013, for the first time in my career, I see continuing anxiety, unpredictability, the lack of a definitive trend, and this will make it a very challenging year.”

He added that due to the presence of too many brands in the industry, only the highly structured big or independent players that do tailor-made pieces would survive.

“Consolidation in the watch industry is accelerating, especially in supply and distribution. This will constrict supply, make distribution more expensive, and decontrol of the value chain, all in a very unstable economic environment.”

Finding the right market will be an important USP in such a scenario.

“The Middle East was one of our first markets as people here are product and brand sensitive, and like novelty items. Over 15 per cent of our global turnover comes from this market, though Middle East usually counts for 5-8 per cent of turnover in the global luxury market.”

Most players who want to enter this market will be dependent on the political and economic environment.

“The good growth markets are Oman, Saudi Arabia, Qatar and UAE. Although Saudi is a difficult market to penetrate due to regulations, it has immense potential.”

“Russians, Indians and Chinese are big buyers in Dubai,” he added.

Emch is even confident about Europe, “Even though Europe is a complex and difficult market, it is lucrative as cost-to-market is low.”

Although China is a profitable market due to the sheer enormity and growing appetite for luxury among the Chinese, it is not lucrative in the short-term due to high import taxes and luxury taxes, he said.

The world’s largest luxury goods company, LVMH, on the other hand, is upbeat about the second half of 2012 after posting H1 profit growth of 28 per cent. The CEO, Bernard Arnault, stated that LVMH plans to “pursue further market share gains in our historical markets as well as in high potential emerging markets.”