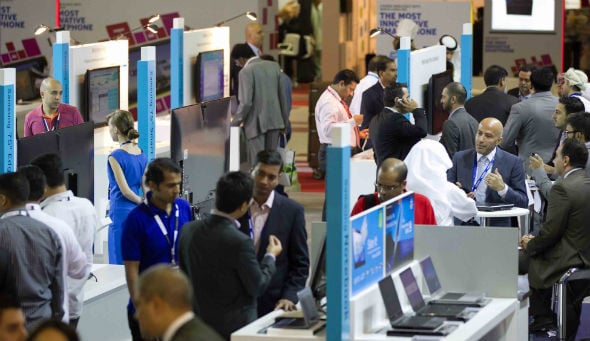 16:45
Walking back to the media centre after an interview, Gulf Business was pleasantly surprised to bump into three unusual and adorable visitors – police dogs (picture of one of them below)! The Dubai Police, similar to other governmental entities, has gone all out this Gitex, boasting a big stand, senior officials and its now ubiquitous Lamborghini car. 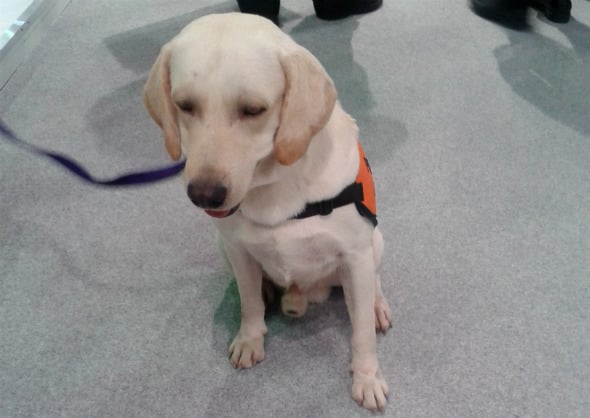 14:45
Middle East companies should refrain from cutting technology costs as the repurcussions can prove to be extremely expensive, advised Darren Thomson, Symantec CTO and head of Enterprise Strategy, EMEA. However he added: “In the UAE, there is recognition about the growing importance of intelligence in IT related matters.”

13:00
Just had a quick chat with Mike Al-Mefleh, director of Product Management, Middle East at BlackBerry and he confirmed that the BBM service for Android and iOS users is being launched in phases across the world to avoid an overload. The service is quick, reliable, safe and secure, he assured us, factors which will help BBM beat rivals.

He also (predictably!) refused to comment on rumours about a possible Lenovo takeover of BlackBerry and confirmed that the company has four new products lined up for next year.

11:30
BlackBerry is finally rolling out its BlackBerry Messenger (BBM) service for Android and iOS users today. There’s a small catch though – to avoid a server crash, the Canadian manufacturer is initially only allowing BBM access to those who signed up for the service in advance. So if you didn’t book a spot, join the queue!

If you want further details about the new service and about how BB hopes to compete with the uber-popular WhatsApp, stay tuned as Gulf Business is soon heading out for an exclusive interview with a senior BlackBerry official.

11:00
Cyber security has been one of the key topics of discussion this year, and all the experts jointly admit that companies and individuals in the Middle East are extremely vulnerable to cyber attacks.

A regional survey conducted by Trend Micro, which looked at different industry verticals including government, IT, engineering, FMCG, construction, automotive, oil and gas, manufacturing and education, found that the region has a 100 per cent infection rate. More than 20 per cent of businesses experienced an average of three security breaches in the past 12 months, it found.

Why is the region so ill-prepared for cyber crime? That’s the question we will pose to officials from Symantec later today.

10:30
Walking into the exhibition on day three, we were surprised to see a long queue of people lined up at the registration desk (pic below). Gitex has been bustling with activity this year, with new announcements from global giants such as Microsoft and HP, and major displays from local bodies such as Dubai Smart Government. 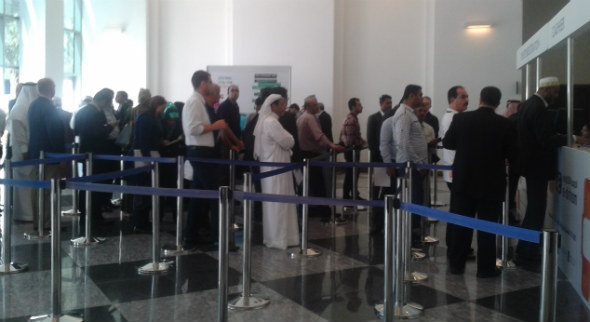 16:00
Computer giant Dell is well-represented at Gitex this year with its president of Enterprise Solutions, Marius Haas, in attendance. Speaking exclusively with Gulf Business, Haas, who reports directly to founder and CEO Michael Dell, told us the company has had a lot of conversations with local municipalities and government agencies in the UAE, describing the current period as “a perfect opportunity to be a part of the economic growth and the overall infrastructure requirements in the country.”

14:30
We’ve spent some time with Valerio Romano, managing director of Technology Consulting at Accenture, who has told us that a lot of lessons surrounding cloud computing have been learnt in the region over the last year. “Large companies are now adopting cloud technology in private and there’s an increasing number of partnerships with banks and telco firms,” he said.

13:00
In an exclusive interview, Sam Alkharrat, director of SAP’s MENA region, said that the software firm has been leading the market in memory computing over the last two years. “We took a pretty courageous step three years ago when we embraced in-memory technology when other vendors failed to see its importance. Now there is a true market valuation for that.

“We are well ahead of others in this technology and now others are planning to catch up,” he added.

12:30
Gulf Business has attended a conference by Kaspersky, where the global security firm has revealed some interesting stats about the UAE’s internet-security habits. While 23 per cent of residents are convinced that bank fraud is a rare phenomenon, 69 per cent have faced at least one financial cyberthreat in the last 12 months. Is it time to stop ignoring the cyber security pop-ups?

12:00
The royal presence today comes in the form of HH Sheikh Mansour who is currently walking around the Zabeel Halls at Dubai’s World Trade Centre. 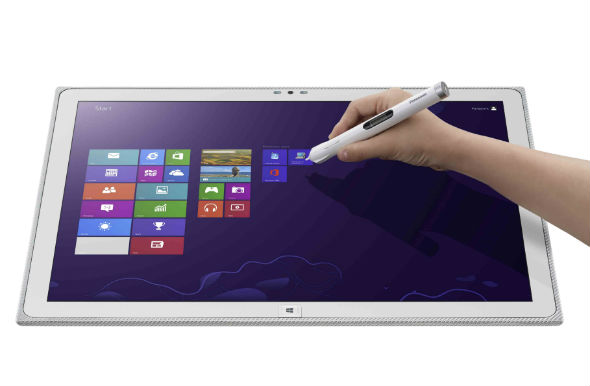 11:30
Gulf Business has spent part of the morning chatting with computer giant HP, specifically about its new range of products. The company has launched what it claims is the world’s fastest ever printer – the HP Officejet Pro X576dw. An company spokesperson said the new device can print 70 pages a minute with no environmental impact and will cost 50 per cent less than a normal office printer. We’re not going to argue with those figures – impressive reading indeed. Although we’re shuddering at the potential cost of its ink and the daily cartridge changes that will abound.

11:00
Day 2 has now officially begun and here on the live blog we’ll continue to bring you all the announcements as they happen, including news from Kaspersky and SAP as well as exclusive interviews with Accenture and Dell.

10:30
Day 1 at Gitex could have been dubbed ‘mobile apps day’ such was the abundance of new launches. Dubai Smart Government kicked things off with the unveiling of several new applications, offering residents the option to pay for bills and phone charges amongst other services though their mobile devices.

DEWA was also in on the app act, launching its own application with services such as moving in or out, requests for final settlements and even requests for temporary connections for weddings. DEWA really showed its digital-savy mindset by presenting its app on the new Samsung Galaxy Gear Smart Watch, Smart Cars and the new Ouya gaming console.

And UAE company Advansoft launched several new applications across a wide range of sectors, including banking, hospitality, fitness, F&B, logistics and retail. Phew. Any companies that did not launch an app yesterday, are probably feeling a little left out.

15:30
Global software giant Microsoft has bestowed an honour upon Gitex this year, using the event to launch its latest 8.1 software in the Middle East. Samer Abu Ltaif, general manager of Microsoft Gulf, has spoken exclusively to Gulf Business about the improvements made to the software and the increased number of product partners that now operate the platform. The full interview on gulfbusiness.com is to follow.

14:40
Finally for some fun! Gulf Business reporter Aarti Nagraj got a rare chance to try out the ultra-futuristic Google Glass, courtesy of app developer, MasterCard. The gadget is surprisingly unobtrusive and projects a screen (roughly the size of a 25-inch TV screen) somewhere on the right side of your face. Here’s a picture: 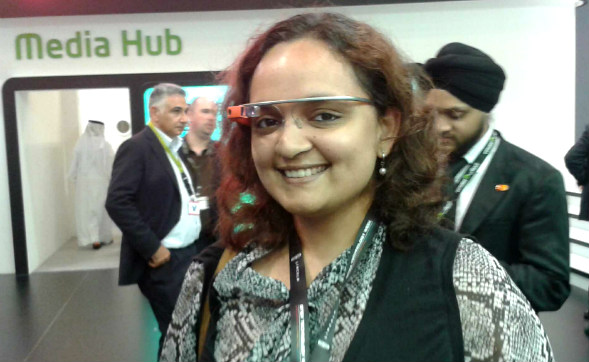 13:00
In the first nine months of the year, Dubai’s Smart Government has seen a 49 per cent increase on the same period last year in the number of people using mobile payments for government services, a spokeperson has told Gulf Business. Promising figures for the government sub-sector as Dubai looks to become a ‘Smart City’.

12:30
Gulf Business has spoken to Ashish Panjabi, COO of Jacky’s Group, who has told us that the hotly anticipated iPhone 5S and 5C will launch in the UAE on November 3. He also said that the new iPad and iPad Mini, which are expected to be announced by Apple this week, will be available in the UAE at the end of this year or early 2014. The Samsung S4 upgrade will come later this year, he added.

Panjabi also revealed that Jacky’s is launching a new side company named Jacky’s Business Solutions which will focus on the upcoming phenomenon that is 3D printing.

11:30
While mobile apps, cloud storage and big data will be some of the trends this week, there is still room for the less subtle mega-TV screens. Samsung has used Gitex to announce the launch of the world’s largest display unit for luxury retail outlets and corporate venues – measuring a massive 95-inches (see below). The Large Format Display offers LED backlit technology, a dual core processor, high-definition graphics and wi-fi capabilities.

Madhav Narayan, senior regional director of Enterprise Business at Samsung Gulf Electronics, said: “The new 95-inch Large Format Display, which we are showcasing at GITEX this year, is the largest in the market and provides unbeatable picture quality with an internal content player and connected benefits.” 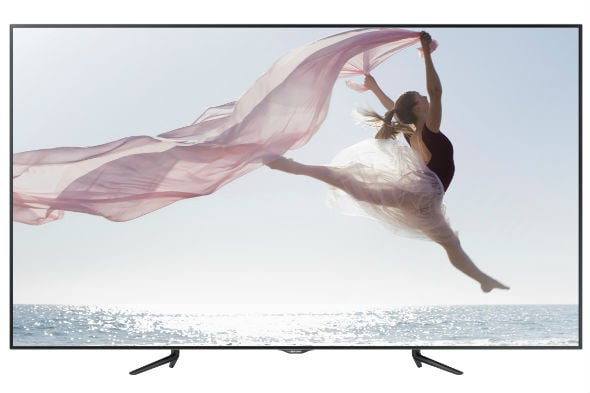 11:00
Dubai Smart Government got ahead of the competition this morning with an early announcement of the launch of several new mobile apps during Gitex. As part of Sheikh Mohammed’s plans to transform Dubai into a ‘Smart City’, one of the apps will offer new communication methods with Government services including hospitals, schools and malls. Another app will offer ways to pay bills including DEWA and Etisalat as well as topping up Salik and Nol cards. 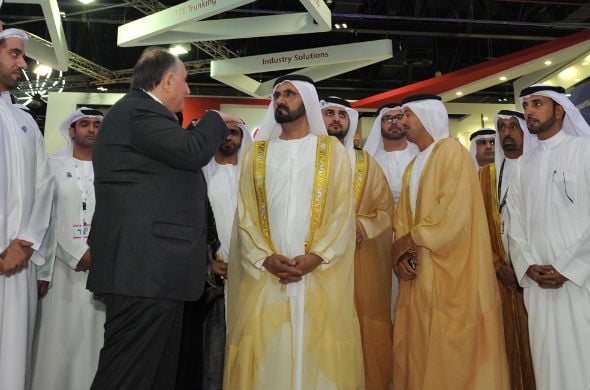 Held at Dubai’s World Trade Centre, the event’s 33rd edition is largely expected to be the biggest one to date with more than 130,000 ICT professionals from 150 countries set to attend, with 80 per cent of the world’s leading ICT brands present.