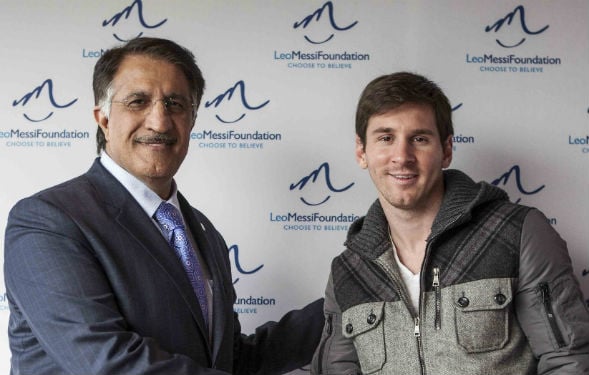 The Argentinian forward will be supporting the company’s various programmes to increase the life chances of young people in the Middle East, North Africa and South-East Asia.

“I’m very happy to be working with Ooredoo as we share the same idea that practical steps make a difference. When I visit sick children in hospital, I realise the positive impact that public figures can have,” said Messi.

“It’s exciting to partner with a global group like Ooredoo, who can help to extend our Foundation work into new markets, to support communities that need help and support young people to have the best chance to make their dreams come true.”

Messi, considered to be one of the greatest footballers of all time after winning his fourth consecutive FIFA Ballon d’Or, has his own charity initiative.

The Leo Messi Foundation was setup in 207 to raise funds for children in at-risk situations in relation to healthcare and education development.

As part of the partnership, the Leo Messi Foundation will develop and sponsor projects to stimulate human growth and development across Ooredoo’s markets in MENA and Southeast Asia.

Dr. Nasser Marafih, group CEO, Ooredoo, said: “We chose to work with Lionel Messi because we believe that football is a shared passion that unites youth in all our countries and that the greatest athletes can play an incredible role in inspiring and enriching young people to make the most of their life chances.

“All of our markets have a large youth population, and Leo Messi is a hero to young people from Jakarta through to Doha. Our new brand ambassador shares our belief in human growth and our conviction that all young people should be given the best life chances, and we’re proud to be working with him.”

In addition to his role with Ooredoo, Messi is also a global goodwill ambassador for UNICEF.

US Ambassador To Libya Killed In Rocket Attack