Lenovo's plan to become number one in smartphones | UAE News 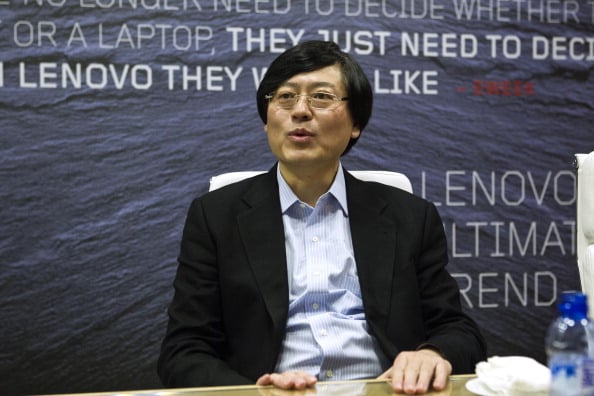 To say Chinese PC giant Lenovo’s recent merger and acquisitions activity has taken some by surprise would be an understatement. In January 2014, the company made two big announcements in succession.

First, a $2.3bn deal for IBM’s server business took some by surprise. Then, several days later, it was the $2.91bn acquisition of flailing smartphone maker Motorola from Google, minus the vast majority of its patent portfolio. In both cases, the units in question had been far from star performers.

When the IBM x86 acquisition was announced the server business had faced seven quarters of losses. Equally, having acquired Motorola in 2012 for $12.5bn, Google had struggled to reverse the company’s years-long decline.

It seemed a case of lost in translation, with Lenovo taking two businesses off the hands of American tech giants that both seemed thankful to be rid of. But for chairman and chief executive officer Yang Yuanqing opportunity was clearly the name of the game. The IBM acquisition took Lenovo to third-place in the $42.1bn global x86 server market. Meanwhile, the combination of Lenovo and Motorola created a force to be reckoned with in the smartphone space – third place by market share behind Apple and Samsung. Now, having established a sizeable market share on both fronts, the 50-year-old Yuanqing is ready for his next play.

The firm will be aiming for “even number one” in the smartphone market he says. “We are definitely coming, we will keep on moving up, we will keep gaining market share.” Ambitious, of course, but if recent history is anything to go by Yuanqing’s optimism is understandable. In 2005, Lenovo completed the $1.75bn acquisition of another IBM unit – its personal computing division. Marking its first steps to become a global business, and coincidentally rocketing to the same third position by volume it finds itself in for enterprise hardware and smartphones today.

Several years of financial difficulties followed but Lenovo’s persistence and manufacturing muscle paid off. Today it is the world’s largest PC manufacturer growing its share to 19.7 per cent of the market in Q2 2015, according to Gartner.“After the acquisition of Motorola we need to take some time to digest, to make the business and to build confidence in our mobile business. Just like we have built in our PC business,” the chief executive asserts.

The PC business has been the making of Lenovo but Yuanqing’s motives for diversifying are clear. The market declined 9.5 per cent year-on-year in Q2 2015, totalling 68.4 million units, according to Gartner. The steepest PC shipment decline since Q3 2013.

The firm has successfully diversified geographically, with 68 per cent of FY14/15 revenue from outside of China, but its exposure to the crumbling PC market is clear to see. Even with last year’s two acquisitions, Lenovo generated 64 per cent of its $46.3bn revenue from PCs. Compared to 25 per cent from mobile, 9 per cent from enterprise and 2 per cent from other business.

It has therefore opted for what it describes as a ‘protect and attack’ strategy. Protecting its core PC business, while attacking the mobile, enterprise and cloud/ecosystem markets.

“We are not a PC company anymore,” says Lenovo China vice president and general manager Tong Fuyao. “We’ve become a more diversified company with a leading position in PC, enterprise and mobile devices.”

To do so, Lenovo will need to significantly boost its performance outside of China including Europe, the Middle East and Africa – which accounted for 26 per cent of global revenue last year, growing 34 per cent to $12bn.

For financial year 2015/16 the company has set ambitious targets to become number one in the EMEA PC market with a 25 per cent share, to go from 10 to 15 per cent share of the tablet market, to ship 15 million smartphones and to reach 13 per cent share in the enterprise market.

On the smartphone side, this will mean a significant push with Motorola at its heart. Lenovo shipped 6.5 million devices to the region last year with its own figures placing it a distant eighth for smartphone sales in the region at a 2.5 per cent market share. Although in the United Arab Emirates and Saudi Arabia, where Lenovo branded devices are sold, it claims to rank third (13.7 per cent) and fourth (6.3 per cent) respectively.

Motorola will be key to diversifying Lenovo’s revenue base and increasing the 76 million smartphones it shipped last year. The combined firms stood at a 5.6 per cent market share in Q1, just ahead of Huawei at 5.2 per cent but still some way behind Apple’s 18.3 per cent and Samsung’s 24.6 per cent, according to IDC.

To boost its share, Lenovo is focussing Motorola device sales on markets it has yet to crack with its own brand – namely the United States, Western Europe and Latin America. At the same time, Lenovo devices will focus on emerging markets. Although, there will be exceptions. Like China, the Middle East is set to be one of the few places to receive devices from both brands – according to executives. This is likely at some point after the summer.

“In the short term, what you’ll see is there is quite some separation in the products [of Lenovo and Motorola]. So just in terms of the market segments that we’re going after,” says chief marketing officer and senior vice president David Roman. “Over time as we look at the development of the portfolios, we will be addressing that but we’re not making any changes in the immediate term.”

For now, the aim is to return Motorola to profitability within four to six months through integration, focussing on manufacturing and the supply chain. Motorola production has moved to Lenovo’s Wuhan smartphone factory, an asset Lenovo chief operating officer and executive vice president Gianfranco Lanci believes will be key in the battle ahead.

Other parts of Motorola’s business, including its Chicago research and development facility – and sales and marketing operations – will remain. Although executives admit the dualbrand strategy may change in the future.

“Are we going to have product with Lenovo brand in one place and Motorola in another? Today’s it is not in the plan but I would not say this will be the case forever,” adds Lanci.

Less than nine months after completing the acquisition of IBM’s server unit, the company has finished most of the integration work in terms of supply chain manufacturing and facilities. Helped by IBM’s server business being located just in front of Lenovo’s manufacturing facility in Shenzhen, plans are also now underway to combine Lenovo’s PC business with its enterprise business for a more comprehensive offering.

“We will definitely play every growth space as well as every mainstream space. We have the engineering resources now to do that and we have the development facilities, and manufacturing capability,” says enterprise business group executive vice president Gerry Smith. Insisting the firm will not just be a “volume player”, Smith reveals Lenovo is investing in hyper scale, high performance and converged computing – setting a goal for 30 per cent of the mainstream hardware market in the next three years.

“The message from enterprise perspective is I’d like my competitors to understand that we feel we can repeat the same magic formula we had for PCs. A lot of people don’t believe that but a number of analysts across the world do believe that we have the supply chain operational capabilities.”

He also suggests the lower margins Lenovo has become used to in the PC market will translate to its server business, which won’t be good news for competitors.

As Lenovo embarks on a march to supremacy in the smartphone and enterprise hardware markets, one key hurdle will be its brand perception. While the company has long lauded itself as a global player, even building a Starbucks in the lobby of its Beijing headquarters, it still has some way to go to become a recognised name in some markets.

In comparison there are few companies in the world today with better brand recognition than one of the players it is looking to surpass, Apple.

“As we focus more on the new categories of products but also this ecosystem strategy.relationship with our users, we obviously have to reshape the Lenovo brand and make it more valuable and more of a premium brand with the markets we’re going after,” says Roman. Although he suggests social media, rather than the huge marketing investments made by companies like Samsung, will be the main part of this strategy.

Equally Lenovo is looking to position itself as an innovator in the smartphone space, using its new annual Tech World event – inaugurated in May – as a platform. At Tech World, the company unveiled two new device concepts. A dual-screen smart watch and a laser projector smartphone with gesture recognition technology.

The latter particularly made headlines with shots of famed pianist Lang Lang playing a virtual piano projection on stage. But both are, for now, just concepts with user trials just beginning. “We use the analogy to our Yoga product very much,” says chief technology officer Peter Hortensius, referring to the company’s flexible notebook line.

“That we issued in our first Consumer Electronics Show back in 2010 and we turned it into a full blown product down the road, you should expect very much the same thing.”

Less clear, however, is the final part of the equation – the company’s cloud and ecosystem strategy. Particularly given these are some of the key challenges for its new business units.

The enterprise hardware market has been under pressure for years now with cloud infrastructure-as-aservice offerings limiting the market for traditional technology. But, despite hints of cloud investment and an IaaS offering through partners, the company has given
little away.

Regional executives hint that the cloud strategy may be a long-term play, with EMEA president Eric Cador suggesting “for the time being it is not a priority” for the company.

Similarly, although smartphone shipments are still growing, up 16 per cent year-on-year to 334.4 million in Q1 2015 according to IDC, the market has been hit by low cost competition from Xiaomi and Huawei. This impacted Lenovo’s profit last year, which missed expectations, up only 1 per cent to $829m.

“Lenovo wants to play a different game. We still want to win in this market but not through aggressive pricing and cut-throat competition,” says Yuanqing. “We want to win through innovation, through Lenovo’s efficient operations.”

Market watchers will clearly be wondering if this is enough for the industry veteran to repeat his winning play in the PC market.