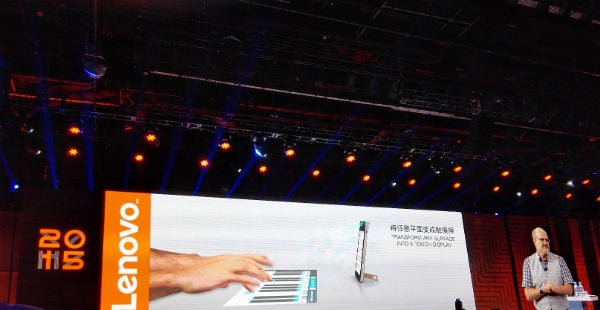 Lenovo, the world’s third largest smartphone maker by market share, today revealed two new design concepts for the smart segment, including a two screen smart watch and a smartphone with a laser projector.

The two screen smart watch is designed to address screen size issues, and functions by having the user raise the device to his or her eye for video and augmented reality functions.

The smartphone laser projector meanwhile, features gesture recognition, allowing the user to project their screen, a game, a video, or even a virtual piano onto and a surface and interact with it.

The two concepts, revealed at Lenovo’s TechWorld event have no set time to market, according to CTO Peter Hortensius and will be tested with user groups over the coming months.

While in the case of the watch, he said the quality of display, and the functionality, may need some fine tuning.

“We agreed the display is not where we’d like it to be, that’s one of the reasons why we’re not ready for market yet, he said.

The company, which acquired Motorola from Google last year for $2.9 billion, is also set to launch two new devices under the brand this summer, according to CEO Yang Yuanqing.

He told reporters at the event, that a smart watch and smartphone are expected from the company this summer.

Faced with competition from digital-savvy players like Xiaomi, the company has also set the ambitious target of a 35 per cent of the Chinese B2C online sales market.

These objectives are part of a strategy to transform Lenovo from a hardware company, to a hardware, software and cloud services player.

Lenovo is also looking to boost its fortunes in the enterprise space, having acquired IBM’s System X server business for $2.3 billion last year.

As a result of last year’s deals Lenovo raised its revenue by 20 per cent in 2014 to $46.3 billion, 37 per cent of which came from tablets, smartphones and servers.

The Chinese manufacturer shipped 76 million handsets last year but saw its profit decline in the final quarter by 37 per cent, dropping from $158 million in 2013 to $100 million.