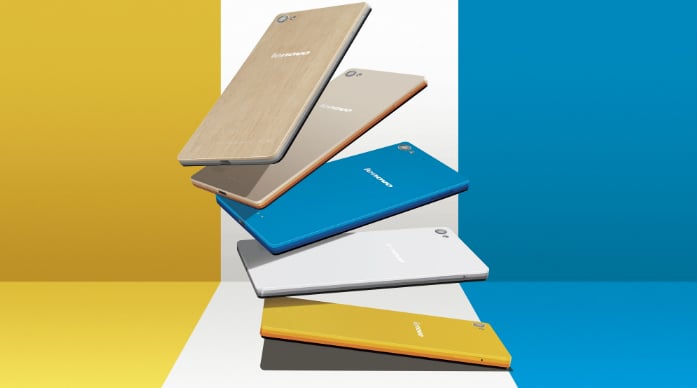 Lenovo has announced the launch of three new smartphones in the Middle East from its VIBE series, including the X2, the Z2 and its flagship VIBE Z2 Pro.

The 5-inch VIBE X2, billed as the world’s first “layered” smartphone, is designed with three gradient layers (they can’t be separated and don’t specifically serve any purpose) and features Lenovo’s new VIBE 2.0 UI.

The phone, quite slim at 7.3mm, features a 13MP rear camera and a 5MP wide-angle front camera which has auto-shutter gesture controls that allow you to capture images by blinking your eyes or waving your hand.

Lenovo has also introduced two click-on back-cover accessories, known as VIBE Xtensions, that include a battery and a JBL speaker. The X2 Battery extends the phone’s battery life by nearly 75 per cent, while the VIBE X2 JBL Speaker amplifes the phone’s sound.

Priced at Dhs1,499, the X2 will retail in UAE stores by end-November and will be available in red, gold and white colours.

The slightly bigger Z2, with a 5.5-inch HD display, is Lenovo’s first 64-bit powered smartphone that runs on a Quad Core 1.2GHz processor and is backed by a 3000mAh battery. Measuring 7.8mm, the dual-SIM device comes with 32GB of internal storage, and includes a 13MP rear camera and an 8MP front camera.

The Lenovo VIBE Z2 is priced at Dhs1,699 and will also be available from end-November across the UAE.

The company’s flagship Z2 Pro will arrive much earlier – from the first week of October in the UAE, and will be priced at Dhs2,499.

It features a large 6-inch screen with 2K resolution, and is dubbed as the smartphone for professional photographers. The 16MP rear camera comes with image stabilisation and a 16:9 BSI sensor that captures widescreen photos at full resolution. It will also allow for simultaneous recording from the front and rear cameras.

Measuring 7.7mm, with a brushed-weave design, the dual-SIM Z2 Pro runs on a Qualcomm Snapdragon 801 processor and a 4000mAh battery and includes 3GB of onboard memory. The phone will offer users non-stop talk time of 45 hours, according to Lenovo officials.

Speaking at the launch, Oliver Ebel, VP and GM, Lenovo MEA said that the company has been seeing a positive response to its smartphones since they were launched in the region in June last year.