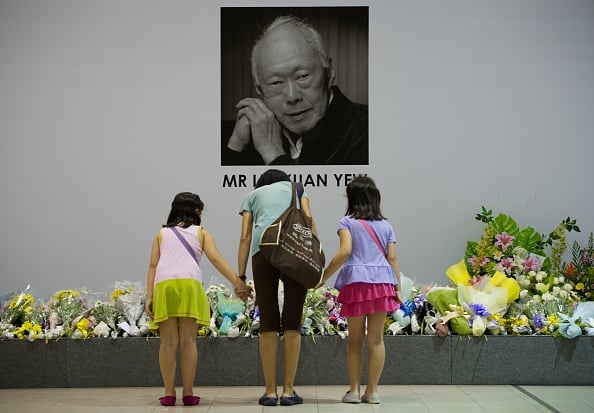 Lee Kuan Yew, Singapore’s first prime minister, died on Monday aged 91, triggering a flood of tributes to the man who oversaw the tiny city-state’s rapid rise from a British colonial backwater to a global trade and financial centre.

U.S. President Barack Obama described Lee, who ruled Singapore for three decades, as “a true giant of history” whose advice on governance and economic development had been sought by other world leaders down the years.

In his lifetime, Lee drew praise for his market-friendly policies, but also criticism at home and abroad for his strict controls over the press, public protest and political opponents.

Lee had receded from public and political life over the past few years, but was still seen as an influential figure in the government of Prime Minister Lee Hsien Loong, his eldest son.

“The first of our founding fathers is no more. He inspired us, gave us courage, and brought us here,” a choked Prime Minister Lee said in a live television address. “To many Singaporeans, and indeed others too, Lee Kuan Yew was Singapore.”

The government declared a period of national mourning until his funeral on Sunday.

Singaporeans had been bracing for the news for days, and a sea of flowers had already piled up at the Singapore General Hospital where he was being treated for pneumonia.

“I’m so sad. He is my idol. He’s been so good to me, my family and everyone,” said Lua Su Yean, 64. “His biggest achievement is that from zero he’s built up today’s Singapore.”

In keeping with Lee’s famously no-nonsense, pragmatic approach, business carried on as normal throughout the city, one of the world’s leading wealth management centres.

Hundreds of office workers queued at lunchtime in the central business district to buy a commemorative issue of the Straits Times newspaper.

At the stock exchange, the message “Remembering Lee Kuan Yew, 16 September 1923 to 23 March 2015” replaced the normal stream of news and market prices displayed on a bank of video.

Lee, a British-educated lawyer, is credited with building Singapore into one of the world’s wealthiest nations on a per capita basis with a strong, pervasive role for the state and little patience for dissent.

He was unapologetic for clamping down fiercely on his opponents, saying it was essential for the country’s security.

Among other hardline measures, long hair for men was outlawed in the 1970s – the Bee Gees and Led Zeppelin cancelled gigs due to the ban – and the sale of chewing gum remains forbidden. Graffiti is punishable by caning.

“He managed to create a system out of chaos when Singapore was starting out,” said Isaac Seow, 29, outside the hospital. “For me, his most defining trait was his iron will. Love him or hate him, he’s got the job done.”

Tributes poured in from around the world heralding the statesmanship of a man who had the ear of policymakers in both Washington and Beijing.

“Lee Kwan Yew’s passing is as much a loss for the international community as it is for Singapore,” China’s President Xi Jinping said.

Obama said in a statement that “Lee’s views and insights on Asian dynamics and economic management were respected by many around the world, and no small number of this and past generations of world leaders have sought his advice on governance and development.”

Thousands are expected to pay their respects at the Istana, which means palace in Malay and is the site of the prime minister’s official residence, where a condolence book has been set up.

“I came to Singapore because of LKY,” said Anthony Pain, from France, who has worked in Singapore for two years as a tax consultant. “I read his book ‘The Memoirs of Lee Kuan Yew’ and I was so impressed I said to myself ‘I have to see this country’.”

Dozens of world leaders are expected to travel to the city-state for Lee’s funeral at the National University of Singapore.

“His place in history is assured, as a leader and as one of the modern world’s foremost statesmen,” Britain’s Prime Minister David Cameron said in a statement. “He was always a friend to Britain, if sometimes a critical one, and many British prime ministers benefited from his wise advice, including me.”

“Harry” Lee, a fourth-generation Singaporean, co-founded the People’s Action Party (PAP), which has ruled the city since 1959 and led the newly born country when it was separated from Malaysia in 1965.

Even after stepping down as leader in 1990 – signing off as the world’s then longest-serving prime minister – the acerbic Lee stayed on in the cabinet until 2011 and was a member of parliament until his death.