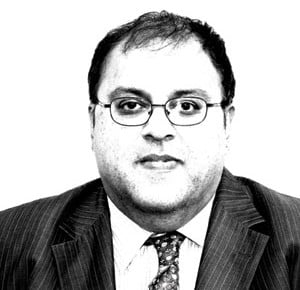 The death rattle of Aleppo has horrified the world. An ancient city that was once the banking centre and trading entrepot of the Ottoman Empire (Halabi bankers such as the Safra clan became world famous in Geneva, Manhattan and Brazil), Aleppo symbolized the cosmopolitan culture of a Levant that no longer exists.

Aleppo was a city of souks and traders, with vibrant Armenian, Kurdish, Maronite/Greek Orthodox Christian, Jewish, Ismaili, Alawites and Sunni Arab business elites who made it Syria’s commercial hub. Now Aleppo is gutted, its cosmopolitan spirit crushed by a brutal, merciless civil war. What a shame, what a world.

The Paris of the Middle East, le reve (dream) d’ Orient, Beirut was once the gold/currency trading and private banking centre of the Arab world, in whose banks, the first generation of Saudi, Kuwaiti and Iraqi petrodollars were invested.

The St. Georges Hotel in Beirut, a haunted place that I associate with the car bomb that killed Rafik Hariri and his entourage on St. Valentine Day 2005, was once the Arab world’s political, financial, diplomatic, intelligence and journalistic epicentre.

Now the St. Georges is a haunted, forlorn place of mourning and memory. Sectarian militias have shed blood in the heart of Beirut and in the hill villages of the Chouf, exactly as they did in the 1970s.

International finance people must necessarily escape the prison of our own language, culture and ethnic origins. This ability defines my tribe of international investors, the ability to switch perspectives and languages, to understand worlds and societies so vastly different from our own.

Lebanon’s investment bankers, heirs to a polyglot Gallic, Arabic and American (AUB on Rue Bliss has been the crown jewel of Arab university education since the 1860s), to an older Ottoman, Greek Byzantine and Roman/Hellenic heritage, symbolized the effervescence of the Levant for me in Wharton, Wall Street, London, Geneva and the DIFC.

The Levant, above all, was an idea of human possibility, of the aesthetics of finance.

It all began with the Phoenicians, the fabled seafarers of the ancient world, whose cosmopolitan ethos survives in the Maronite villages of Mount Lebanon, the Armenian enclaves in Aleppo and Beirut’s Bourj Hamoud, the Hellenic (now sadly gone) Greek community of Alexandria, the Circassian merchants in Amman, the Lebanese diaspora from Sao Paulo to Brooklyn’s Atlantic Avenue.

When I am in Istanbul, I gaze at the Galata Tower above the hills of Pera (Beyoglu), built by medieval Genoese and Venetian traders. It does not surprise me that David Ben Gurion was unable to persuade Ottoman Jews in Constantinople to embrace Zionism.

The Turkish Jews, refugees from the Spain of the Reconquista and the Inquisition, are members of Istanbul’s business elite six centuries later. Once, Beirut and Aleppo welcomed the survivors of the Armenian genocide, as generations later they were to welcome the survivors of the Palestinian naqba and the post-Saddam Iraqi civil war refugees.

Nationalism, ethnic cleansing, insane ideologies, bigotry and brutal, Paleolithic capricious dictatorships destroyed the cosmopolitan DNA of the Levant well before I was born. In my lifetime alone, Iraq, Syria and Lebanon have been destroyed in horrific civil wars, their ancient mosaic of ethnic and religious minorities living in tolerance disrupted by fanaticism, war, foreign invasions and Baathist tyranny.

It is tragic that Beirut, Smyrna (Izmir), Alexandria and Istanbul were not able to form an international alliance of free ports, a Mediterranean version of Germany’s Hanseatic League. Yet history is too cruel for fairy tale endings in the Middle East.

The spirit of polyglot, cosmopolitan men and women of finance now survives in a city whose rulers have embraced tolerance and openness to the world as a basic value, whose 200 resident nationalities have created an exciting, vibrant mélanges of cultures, languages, identities, perspectives and cultures. The city, of course, is Dubai, the dream cosmopolis on the Creek.