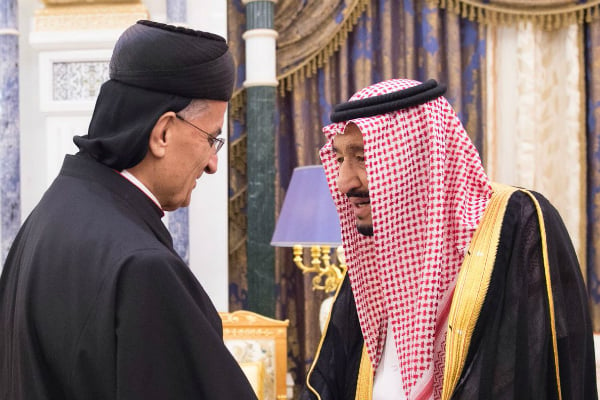 Lebanon’s Christian Maronite Patriarch met Saudi Arabian King Salman on Tuesday in a historic visit to the ultra-conservative Muslim kingdom which bans the practice of other religions but says it wants to open up more to the world.

He will also meet with Crown Prince Mohammed bin Salman, who in addition to pushing radical economic reforms has pledged to relax his country’s strict social norms and revive “a middle-of-the-road, moderate Islam open to the world and all religions, traditions and people”.

An official visit to the kingdom by such a senior non-Muslim cleric is a rare act of religious openness for Saudi Arabia, which hosts the holiest sites in Islam but does not tolerate non-Muslims practising their faith publicly, forcing Christians to risk arrest by praying in private homes.

Patriarch Beshara al-Rai heads the Maronite church, which has a presence in Lebanon, Syria and Cyprus and follows an Eastern rite of the Roman Catholic church.

He also met later with Saad al-Hariri, a Saudi ally who resigned as prime minister on November 4 in a move Lebanese political leaders ascribed to pressure from Riyadh. Hariri said his resignation had been prompted by an assassination plot. He accused Iran and Hezbollah of sowing strife in the region.

Prince Mohammed, the 32-year-old son of the king, has taken a harder line on Iran since taking on wide-ranging authorities over the past two years including defence minister.

He has also pushed for more social freedoms in a country where authority has rested on an enduring accommodation between the royal family and clerics who control the hardline Wahhabi strain of Islam that originated in Saudi Arabia.

Already the powers of the religious police have been curbed, enforcement of gender segregation has been relaxed and women have been granted some more freedoms, including the right to drive cars starting next year.

Rai is now the second Christian patriarch to visit the country, after another such trip in 1975. His trip was planned before the current political crisis in Lebanon and he said the original invitation had been extended in 2013.