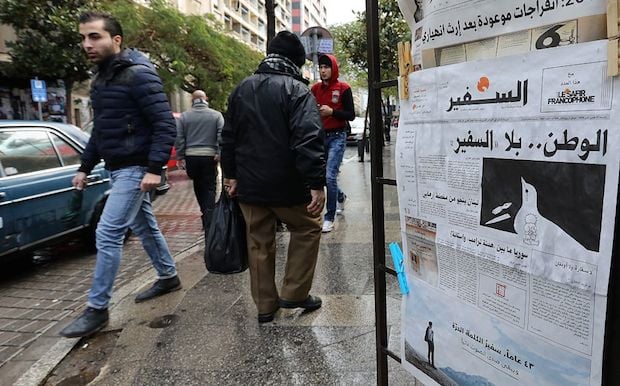 Lebanese daily newspaper As-Safir printed its final edition on Saturday, forced to close after 42 years because of financial problems as other news outlets in the country face similar difficulties.

The front page led with an editorial entitled “The nation without As-Safir”.

“The economy is not well, and nor is politics. This cannot but reflect on and impact the press,” the article said.

Chief editor Talal Salman earlier in the year blamed the newspaper’s planned closure on falling revenues and Lebanon’s political and sectarian problems, including the absence of a president and functioning state institutions.

Lebanon’s parliament elected President Michel Aoun in October after more than two years without a head of state, and a new government was named this month.

Growth in Lebanon’s economy has been sluggish since the collapse of a unity government and the start of the Syrian civil war next door in 2011. Gross domestic product (GDP) grew at only 2 per cent in 2014.

As-Safir‘s editorial said that despite Lebanon escaping the levels of violence that have plagued much of the region in recent years, the knock-on economic and political effects on the tiny Mediterranean country, which hosts over one million Syrian refugees, have taken their toll on its once thriving press.

The daily, which is close to the Lebanese Shi’ite group Hezbollah, was founded in 1974 with the slogan “a voice for those who have no voice”.

A cartoon on the front page of its last issue featured a broken pen and the ubiquitous character Handala – the creation of a Palestinian former As-Safir cartoonist – a child who bears witness to war and destruction in the Arab world.

Other newspapers have also been affected by Lebanon’s economic woes, including daily An-Nahar, which is set to cut a large number of staff.

Lebanon’s press union urged the government this week to take steps to strengthen the country’s print media. As-Safir said there were discussions with the new information minister for possible funding for the sector worth up to $15m per year. The government has yet to approve the plan, however.

Lebanon has a paralysed political system and sectarian tensions left over from a civil war that ended around 15 years ago. These have increased with Syria’s war.