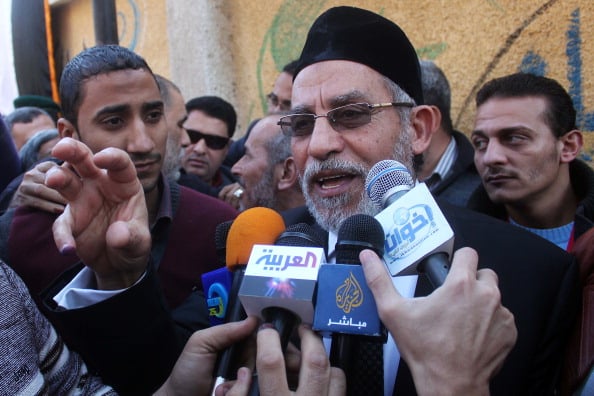 Egypt’s Interior Ministry said on Saturday the top leader of the Muslim Brotherhood, Mohamed Badie, was in good health and denied reports that he had died from a heart attack in prison.

Any severe deterioration in Badie’s health in prison would certainly deepen hostilities between the organisation and the army-backed government that deposed the Brotherhood-backed president, Mohamed Mursi, in July.

Egypt is enduring the worst internal strife in its modern history, with about 900 people killed, including 100 police and soldiers, after security forces broke up protest camps by Mursi’s supporters in the capital on Aug. 14.

State-run al-Ahram newspaper reported earlier that he suffered a heart attack while in jail but his condition had since stabilised.

It was not clear whether the Interior Ministry was denying just the death or the death and the heart attack.

State-run news agency MENA earlier denied a report by the private al-Nahar website that the 70-year-old Badie had died.

Badie and many other leaders have been arrested in recent weeks in one of the toughest crackdowns the Islamist group has faced.

Badie was charged in July with incitement to murder in connection with protests before Mursi was ousted. He was due to be questioned on Aug. 28 but prison authorities delayed the session because of Badie’s poor health.

Brotherhood spokesman Gehad el-Haddad said he had no information on Badie’s health when asked to respond to reports that he had died in prison.

A medical team was sent to Torah prison on the outskirts of Cairo to assess Badie’s medical condition on Saturday, a security source told al-Ahram.

The source said his condition has stabilised and that the heart attack resulted from the “bad psychological state that he is going through”.

The Brotherhood has been calling on Egyptians to stage mass protests to demand the reinstatement of Mursi, who was ousted following widespread protests against his rule a year after he was elected.

The government has accused the Brotherhood of terrorism and seems determined to wipe out the group.

The Brotherhood, in turn, accuses the authorities of trying to rehabilitate the old, repressive administration led by President Hosni Mubarak before he was toppled by a popular uprising in 2011.

However, the arrests of Badie and others have made it difficult for the group to get large numbers on the streets.

Founded in 1928, the Islamist group used its organisational muscle to secure victory for Mursi in last year’s presidential election.

The whereabouts of many senior Brotherhood politicians are unknown. Those who had been posting frequently on social media have stopped. Arrests have extended beyond Cairo, also netting provincial leaders of the movement.

One of Badie’s sons was killed during protests against the army-backed government.