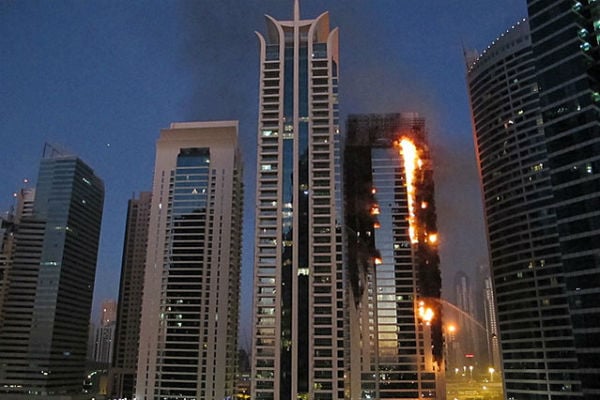 A large fire broke out in Dubai’s Jumeirah Lakes Towers (JLT) development in the early hours of Sunday morning, forcing hundreds of the building’s tenants to evacuate as emergency fire crews attended the scene.

The blaze at the Tamweel tower, a 34-storey building home to 160 apartments, is believed to have started around 2 am and was not brought under control until daybreak, some four hours later.

Authorities have reported there are no casualties while some roads in and out of JLT have been closed this morning.

Tenants from neighbouring buildings were also evacuated as burning debris fell from the building onto nearby balconies. The fire is believed to have started on one of the upper floors of Tamweel tower, though the cause is yet to be confirmed.

Sirens from emergency vehicles could be heard in the JLT and Marina areas of Dubai in the early hours of the morning as Dubai’s Civil Defence units rushed to the scene.

Jumeirah Lakes Towers is a large development consisting of around 80 high-rise towers including hotels, offices and residential apartments.