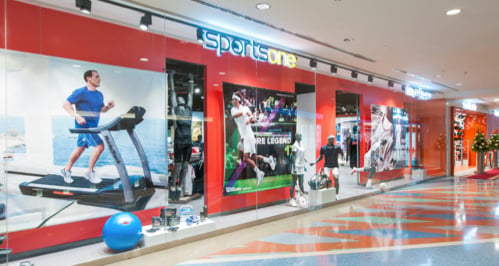 Retail conglomerate Landmark Group has announced major plans to expand Sports One, its sporting goods retail concept, across the GCC.

The company aims to operate 40 new stores across the region by 2016, up from the six stores currently in operation. It plans to open in four new locations within the next couple of months, Landmark said in a statement.

Vipen Sethi, CEO of Landmark Group said: “The Landmark Group’s foray into the sports retail sector was an important milestone that allowed us to expand and diversify our existing portfolio.”

Sports One launched its first flagship store in Riyadh, Saudi Arabia in December 2012, and opened its UAE store earlier this year.

The large format stores offer a range of sporting products from over a hundred brands. They also include dedicated sections for sports merchandise, sports apparel, footwear in running and training, and specialised products for sports such as basketball, golf, tennis and table sports.

Some of the exclusive brands retailed at Sports One include Schwinn, Diamond Back & K2 Bikes, Soybu Yoga Apparel, Island Haze, Maui and Stream Machine Swim products.

Shivam Goyal, business head, Sports One said: “The launch of Sports One in December 2012 came on the back of our market research that indicated a definite gap in the sports retail sector.

“Besides men, our stores heavily focus on women and kids range of products that were grossly ignored in this segment.”

Sports One stores also offer services such as GAIT analysis that recommends the right footwear for the feet, racquet stringing and weight balancing, printing and embroidering services and delivery and installation of gym equipment.

The GCC’s retail sector has been growing significantly, and is slated to reach $221 billion by 2015, according to the Kuwait Financial Centre (Markaz).

“A consistently expanding population base, young population and growing urbanisation make demographics of the GCC highly attractive for retailers of both essential and discretionary products,” Alpen said in its report.

“A growing GDP, substantial government spending on infrastructure and healthcare, low fuel prices and low or no tax incidence, free up a substantial portion of individuals’ income for consumption of food and non-food items and fuelled the growth of the retail industry,” it added.