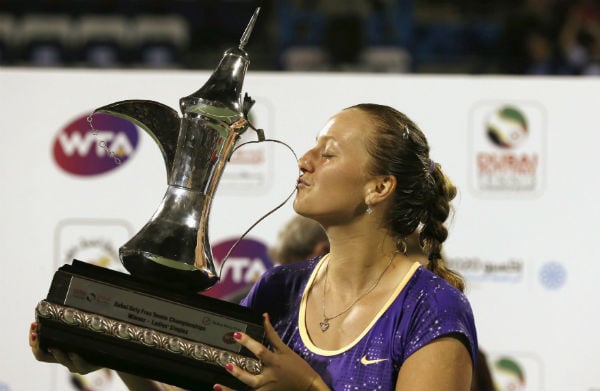 Former Wimbledon champion Petra Kvitova claimed her 10th singles title after defeating Sara Errani 6-2 1-6 6-1 in the final of the Dubai Championships on Saturday.

The Czech started as favourite after winning her previous three meetings with the world number seven and the 22-year-old sought to assert her dominance from the off.

“It was very tough, up and down – she can catch a lot of balls and get them back… I tried to stay focused and calm in the last set,” Kvitova said in a courtside interview.

She broke twice to race into a 3-0 lead in under 10 minutes as the diminutive Errani struggled to handle the world number eight’s fearsome forehand.

The Czech, who did not drop a set in beating 2012 champion Agnieszka Radwanska and former world number one Caroline Wozniacki in earlier rounds, suffered a wobble as two double faults helped Errani to narrow the deficit to 4-2, but the left-hander broke again to seal the set.

After such a stroll, it was easy to forget that claycourt specialist Errani was actually the higher-ranked player and few among the crowd would have expected anything but a similar procession for Kvitova in the second set.

The indefatigable Errani had other ideas, however, and with the crowds firmly supporting her, the 2012 French Open finalist switched to a serve-and-volley approach.

That enabled her to break three times and she also held her own serve with increasing ease, winning six games in a row to square the match as more errors crept into Kvitova’s game.

“She was hitting so strong, making winners everywhere – I had to change something to try to win the match, to be more aggressive,” Errani, 25, told reporters.

“It’s hard to play because her ball is very flat – I don’t have time to do the points that I want to do, to play the game I want to play.”

The momentum was with Errani and she went 0-40 up with the Czech serving at 1-1 in the deciding set, but the latter escaped with a series of blistering serves.

That proved to be the pivotal moment, Kvitova breaking at the next opportunity and then holding for a 4-1 lead before sealing the title with an unreturnable serve.

Despite the win, Kvitova was cautious about the significance of her victory since the world’s two best players, Serena Williams and Victoria Azarenka, pulled out of the tournament.

“I’m still thinking about my game – that’s the priority for me,” Kvitova said when she was asked if she could rejoin the game’s elite.

The Czech ended 2011 as world number two after claiming six titles including Wimbledon that year, but she has failed to make it beyond the quarter-finals in the past three grand slams and has slipped down the rankings.

She will move up to seventh when the new standings are published on Monday, swapping places with Errani.