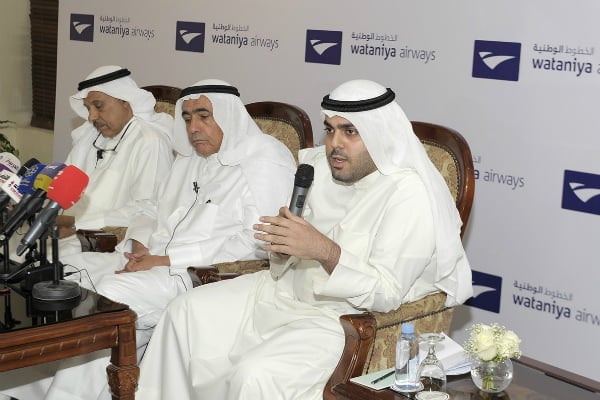 Troubled Kuwaiti airline Wataniya Airways said in a news conference on Monday that “unexpected” circumstances forced it to cancel flights and leave hundreds of passengers stranded abroad over the holiday season.

Last month, Crown Prince Sheik Nawaf Al-Ahmad Al-Jaber Al-Sabahi instructed the government to fly citizens affected by the cancellations home from destinations including Istanbul, Baku and Sarajevo and the carrier was issued an ultimatum by Kuwait’s aviation regulator.

The Directorate General of Civil Aviation (DGCA) said several warnings had already been issued to the airline “to no avail” and it had until September 5 to correct the situation or it would face a three-month ban.

At a press conference on Monday, Wataniya chairman Ali Al-Fozan said the cancellations “could not be avoided” after three of its planes went out of service.

“One of the planes, an Airbus A320, had a failure in one of its engines, and the company could not find a replacement in the market,” he was quoted as saying by state news agency KUNA.

Wataniya then hired two planes from Olympus Airways but the DGCA refused to register the aircraft because “of the reputation of the company and there were some reservations over it”.

Al-Fozan said the carrier could not operate with one plane so it decided to suspend operations.

The flight cancellations are still affecting passengers weeks later with Kuwait’s Embassy in Ankara on Monday calling on citizens stranded at Trabzon Airport to contact it to secure their return.

Kuwait Airways is running extra services to fly passengers home and the Wataniya board confirmed on Monday it was discussing compensation for passengers whose flights were delayed or cancelled.

The problems come barely a year after the privately-held carrier resumed operations in July 2017 after a six-year absence blamed on its financial situation and political instability in the Middle East.

Al-Fozan insisted the carrier’s financial position was “good” despite the recent turmoil, according to KUNA.

The carrier’s exclusive aircraft provider Golden Falcon Aviation confirmed an order for 25 Airbus A320neo jets worth around $2.8bn at list prices in July and it has revealed plans to launch services to markets including Egypt, the UAE, Lebanon, Jordan, Iran, India, Pakistan.