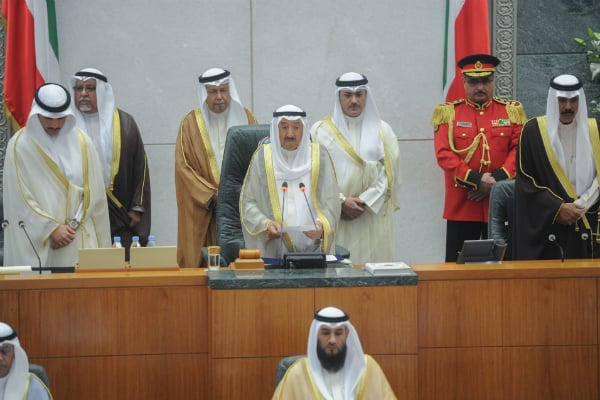 Kuwait’s Emir Sheikh Sabah Al Ahmad Al-Jaber Al-Sabah has warned against escalation in the current dispute between Qatar and its neighbours Saudi Arabia, Bahrain and the UAE.

Speaking at the opening of the second session of the country’s parliament on Tuesday, he said the country was aware the “the crisis risks escalation”, which would be an invitation for “regional and international intervention”.

“History and future generations of the Gulf and the Arabs will not forgive anyone who contributes, even one word, to fuel this dispute or cause it,” he was quoted as saying by state news agency KUNA.

He described the GCC as a “glimmer of hope” in the darkness of the Arab world and stressed the need for a calm approach and the avoiding of conflict to overcome the crisis.

“What brings us together is stronger than what divides us. Let us fear God in our countries and ask Allah to calm our souls,” the emir said.

Kuwait has been acting as a mediator in the dispute, which saw Saudi Arabia, the UAE, Bahrain and Egypt close diplomatic and economic ties with Qatar on June 5.

The four countries accuse Qatar of having close links to terrorist groups and regional rival Iran.

Kuwait is the host of the next GCC summit in December but it has reportedly called for the meeting to be postponed to help resolve the current crisis.

“Postponing the summit was a Kuwaiti suggestion, and Kuwait has not yet received an answer from the other countries,” Saudi publication Okaz quoted a source as saying.

Prior to this, Kuwaiti publication Al Rai reported the meeting could be postponed for six months unless there is a big political change.

The dispute appears no closer to being resolved with US secretary of state Rex Tillerson stating after a meeting in Saudi Arabia on Sunday that there was not a “strong indication” the sides were ready to talk.

Read: US official Tillerson says Saudi not ready for talks with Qatar on GCC crisis